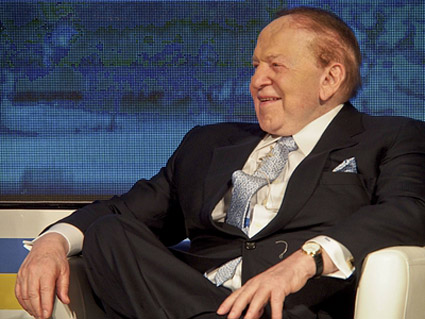 The debate over whether to bomb Syrian military facilities and weapons installations is creating some strange bedfellows. Among them: President Obama and Las Vegas casino mogul Sheldon Adelson.

On Tuesday, the Republican Jewish Coalition, which counts Adelson as a donor and a board member, told its members to urge Congress to authorize a strike in Syria. A spokesman for Adelson, a top backer of pro-Israel causes, told Bloomberg News that the gambling mogul supported the coalition’s position—and thus Obama’s—on Syria.

Obama and Adelson are far from ideological allies. Adelson reportedly spent upwards of $150 million, in disclosed and dark money, to defeat Obama in last year’s presidential election. He and his wife, Miriam, almost single-handedly kept Republican presidential hopeful Newt Gingrich in the running during the GOP primary season, giving $20.5 million to the pro-Gingrich super-PAC, Winning Our Future. Once Romney won the party’s nomination, Adelson and his wife poured $30 million more into Restore Our Future, the pro-Romney super-PAC. On election night, Adelson attended the Romney campaign’s party at the Westin hotel in Boston.

During the campaign, Adelson questioned Obama’s commitment to protecting Israel. “Time and again, President Obama has signaled a lack of sympathy—or even outright hostility—toward Israel,” Adelson wrote in an op-ed for JNS News Service. These days, Adelson seems to be feeling better about Obama’s foreign policy stance.