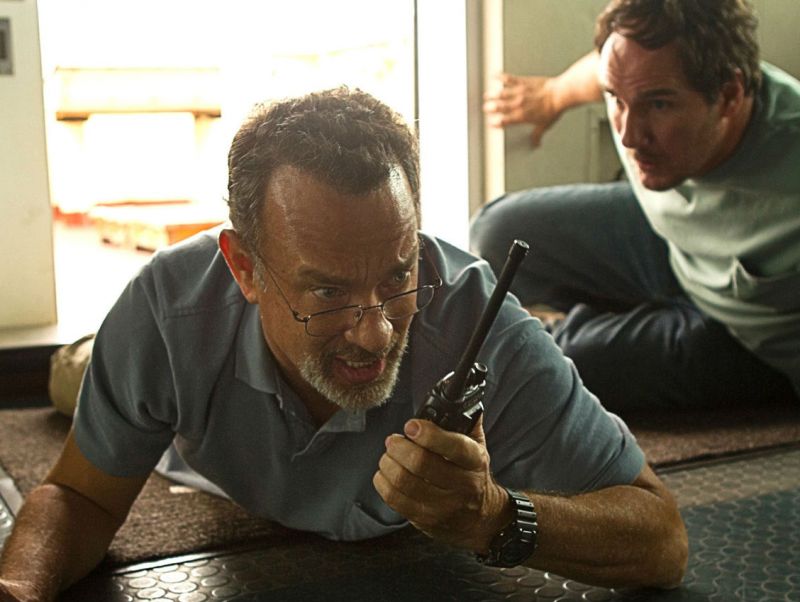 Captain Phillips, directed by Paul Greengrass, tells the true story of Richard Phillips (played by a New England-accented Tom Hanks), a merchant mariner taken hostage by Somali pirates in 2009. After being held for five days aboard a lifeboat, Phillips was rescued when Navy Seal snipers took out three of his Somali captors. “I share the country’s admiration for the bravery of Captain Phillips and his selfless concern for his crew,” President Obama said in a statement on April 12, 2009. “His courage is a model for all Americans.”

Last week, Phillips attended a special screening of Captain Phillips at the Newseum in Washington, DC. Hanks was there, taking selfies with sailors. Barkhad Abdi (who plays the pirate Abduwali Abdukhadir Muse) was in attendance, as were Navy Commander Frank Castellano (one of the men who saved Phillips) and Greengrass. The 58-year-old English director is a former journalist who directed two other acclaimed docudramas: Bloody Sunday and United 93. “Films aren’t journalism,” Greengrass emphasized while introducing his film, though he argued that dramatizations are capable of conveying certain “truths.”

I caught up with Phillips after the screening and he filled me in on some of the dramatic license taken. (The movie was penned by Billy Ray, who based his screenplay on Phillips’ book A Captain’s Duty.) For instance, toward the end of the film, Phillips asks his abductors if he can pee on the outside of the lifeboat. They allow it. Phillips takes his chance for a potential escape, and begins swimming to safety. The pirates chase and swim after him, and manage to drag him back on to the boat, where they beat him savagely. It’s a tense and dramatic scene, one of the film’s most crucial—but there’s at least one big difference from what went down in real life. “They did not let me urinate,” Phillips says, with a bit of a smile. “So, no, that’s not what happened.” The scene is, however, based on Phillips’ thwarted escape attempt.

When asked how accurately Captain Phillips portrays the brutality he suffered at the hands of the pirates, Phillips said the movie actually tones it down. “Oh, it was much worse, the way they tied me up,” he says. “I still have the scars.” Also, a key part of the film involves one pirate slicing open his foot after stepping on broken glass that Phillips’ crew left as a trap. The pirate’s bloody foot is mentioned in practically every scene following the initial injury. “There was no glass,” Phillips says, pointing out yet another bit of Hollywood fiction.

Still, the captain is a big fan of the movie, creative liberties and all. Prior to their introduction, Phillips didn’t really have any idea who Greengrass was. “I’m not a huge movie buff, and hadn’t seen any of his work except for the Bourne movie,” Phillips says. In preparing for the film, Hanks—who Phillips refers to as “your average nice, typical guy”—met with the mariner to nail down the accent and the character. “When I met him I told him if he’s going to play me he’s going to have to put on a little weight and get a little better-looking and he did neither,” Phillips told the Daily News.

And even after his widely covered ordeal, the captain is still doing his thing. Just a couple of weeks ago, Phillips had just returned from sea, leading a crew around Oman, Japan, and elsewhere. The week after, he was in Washington, hanging out with reporters and Tom Hanks.

Here’s a trailer for Captain Phillips, which gets a wide release on Friday: