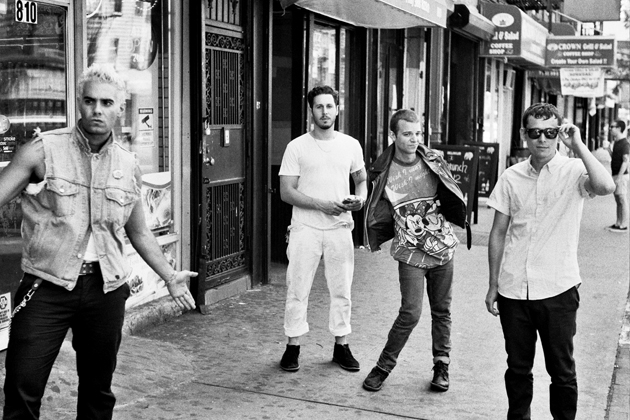 As they hit the road in support of their almost-criminally catchy new record, Blowout, Brooklyn punks The So So Glos found out there’s a price for success. That price? A broken air conditioner, $500 worth of new tires, and a pair of bedbug outbreaks.

“In the past we would just stay in people’s houses,” drummer Zach Staggers says. “Now we have money and we stay in hotels, and we get bitten by bedbugs.”

Not that they’re complaining. With Blowout earning praise from the likes of Rolling Stone and Pitchfork, the band’s been claiming more and more converts to its shoutalong live shows and underdog ethos. (Those Mets caps aren’t just for show.) “When we made the record, we were trying to commit to tape something that could translate live,” guitarist Matt Elkin says. “It has to capture the same live essence.”

If you come to a So So Glos show, you’d better be ready to dance and leave your phone in your pocket/your purse/the bottom of a lake somewhere. Anyone tapping on a little screen or spending more time lining up cell phone shots than rocking out is liable to get called out by the band members onstage, who police the proceedings—sometimes literally, with bassist and lead singer Alex Levine donning a cop hat and whistle. “Sometimes you just need to turn it off and smash up your phone,” Levine says. “Bring it back to just humanity—the world is a dangerous place, but the dance floor’s getting safer and safer.”

“Our dream was never to run a venue—our dream was to keep touring—but we believed it needed to happen.”

That spirit pervades Shea Stadium, the all-ages Brooklyn DIY venue the band helps run. It’s a combo rehearsal/recording/live space in which every set is recorded and uploaded online, producing a massive archive of independent rock and roll. The space was founded in 2009 to provide bands with a supportive local community in something bigger than a basement. “There was a lot of noise rock, artsy things,” Levine says. “There wasn’t really a rock and roll scene.”

Shea offers an alternative to a bar scene that can make things difficult for local bands by sticking them on tickets with no regard for musical style, forcing underage fans to sneak in to see their friends’ bands, and not-too-infrequently stiffing musicians on the final payout. “Our dream was never to run a venue—our dream was to keep touring,” guitarist Ryan Levine says. “But we believed it needed to happen.”

Now the band’s doing both those things, have those goals been updated?

“Our dream is to get bedbugs in every city,” Alex Levine says. “And then just keep getting bedbugs.”