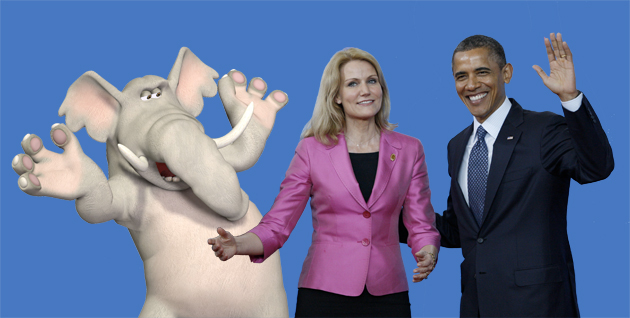 It is often hard to connect actions to racism—and sometimes it is hard not to. When conservative activists and leaders excitedly contend that the first black American elected president was secretly born overseas and, consequently, is a pretender to the office, it certainly is difficult to ignore racism as a possible contributing motive. (These same people are in no uproar about Republican Sen. Ted Cruz’s birth in Canada.) And when President Barack Obama is repeatedly branded a sexed-up flirt, despite the evidence he is a stand-up family guy, a similar query is unavoidable: Is race a factor?

The conservative New York Post this week has done extra duty to promote the idea that the president is a cad (and Michelle Obama is the resentful, jealous, and bossy wife). After photos emerged of Obama taking a selfie with Danish Prime Minister Helle Thorning-Schmidt (with British PM David Cameron the third wheel) and the first lady looking displeased, the media was all abuzz, and Rupert Murdoch’s paper led the way with its front-page coverage pitched with this witty headline: “Flirting with Dane-ger.” The next day, Post columnist Andrea Peyser pushed the story—and the already widely spread meme—further. In an article headlined, “Flirty Obama Owes Us an Apology,” she ranted that Obama had “lost his morality, his dignity and his mind, using the solemn occasion of Nelson Mandela’s memorial service Tuesday to act like a hormone-ravaged frat boy on a road trip to a strip bar.” She referred to the Danish leader as a “hellcat” and pegged the needle in sexualizing this story: “Thorning-Schmidt placed her hands dangerously close to Obama’s side. The president’s cackling head moved inches from the Danish tart’s and yards away from his wife’s. Obama then proceeded to absorb body heat from the Dane, which he won’t be feeling at home for a long time.” Meet Obama, the lustful and wild predator who cannot control his urges at a solemn occasion.

Peyser was working with an idea—the president as sexy beast—not the facts. The day before her story appeared, Roberto Schmidt, the German Colombian news photographer who had snapped the shots that had ignited this nonscandal threw a bucket of cold water on the story Peyser and others were peddling:

I captured the scene reflexively. All around me in the stadium, South Africans were dancing, singing and laughing to honour their departed leader. It was more like a carnival atmosphere, not at all morbid. The ceremony had already gone on for two hours and would last another two. The atmosphere was totally relaxed—I didn’t see anything shocking in my viewfinder, president of the US or not. We are in Africa.

I later read on social media that Michelle Obama seemed to be rather peeved on seeing the Danish prime minister take the picture. But photos can lie. In reality, just a few seconds earlier the first lady was herself joking with those around her, Cameron and Schmidt included. Her stern look was captured by chance.

Schmidt noted that he spotted nothing improper. Obama had not been a wild man who had prompted a wifely rebuke. Still, that did not prevent Peyser from day-threeing this event with lasciviousness: “Michelle frowned and looked as if she wanted to spit acid at the man she married, a good-time guy who humiliated her in front of their friends, the world and a blonde bimbo who hadn’t the sense to cover up and keep it clean.”

Why is it that Obama repeatedly draws this sort of attack? In 2009, the Drudge Report and Fox News played up a photo from the G8 summit that supposedly showed the president leering at a teenage girl’s rump. The Drudge headline: “Second Stimulus Package.” Fox Nation went with “Busted?” And the fact that the target of his roving eyes was 17 years old was played to much salacious effect. Examiner.com reported—presumably mistakenly—that the subject of Obama’s less-than-honorable attention was only 16 years old. The New York Post exclaimed, “The leader of the free world and his French counterpart were caught sneaking a peek at a the pink-satin-draped booty of a 17-year-old junior G-8 delegate just moments before the summit’s official group photo was snapped in Italy yesterday. Obama wasn’t the only head of state getting Yankee Doodle randy.” And Fox & Friends dug up another photo from the summit that appeared to show Obama staring at the rear end of a different woman.

You know the rest of the story. When the full video of the event emerged, it was clear that Obama had not gazed with ill intent at the young woman. (The video, though, hardly cleared French President Nicholas Sarkozy.) But the point had been made: this guy cannot help himself.

A year ago, the Daily Mail advanced this plot line with a report that Obama repeatedly flirted with Prime Minister Yingluck Shinawatra while on a trip to Thailand. The article—”Obama gets flirty as he schmoozes with Thai prime minister”—was accompanied by several photos that appeared to show Obama and the “attractive” Shinawatra exchanging “playful glances.” (The perhaps sexist implication here—as with Peyser’s column—is that female heads of state melt into a puddle whenever O is near.)

This sort of coverage might well happen to a good-looking white guy who was president. But remember when George W. Bush gave German Prime Minister Angela Merkel an impromptu back rub at a G8 meeting in 2006? The video went viral, and the episode launched a flood of jokes and spoofs. Yet, there wasn’t much talk of Bush being an impulsive flirter driven by sexual temptation. A Google search turned up no indication that Andrea Peyser rushed to her keyboard to pronounce Bush a moral failure and embarrassment to the nation. At least, Bill Clinton gave people a reason to wonder about his behavior. (During the 1992 campaign, cabaret singer Gennifer Flowers publicly claimed she had a 12-year affair with Clinton; years later, Clinton, in a deposition, countered that he had only one sexual dalliance with her.)

What is it about Obama that causes conservative critics to question his legitimacy as a citizen and his ability to control his sex drive? (In something of a twist, right-wing agitator Jerome Corsi, a leader of the birthers, has in the last year been pushing a different Obama sex story: The president is secretly gay and once upon a time was actively part of Chicago’s wild gay bar and bathhouse scene.) It is not too far a stretch, when pondering all this, to recall how racists in the past depicted black men as licentious and a danger to women—that is, white women. Is a remnant of that in play when Obama is cast as a lecherous or flirtatious scalawag? There’s probably no definitive answer to be reached here. (Can you—do you want to—peer into the soul of Andrea Peyser?) But the question is real enough that it ought to give commentators and columnists (and their editors) pause before they again revive this Obama Unchained narrative.