Jehane Noujaim’s The Square, which won an audience award at the 2013 Sundance Film Festival and is on the shortlist for an Oscar this year, delivers a fierce and frenetic portrait of life on the Cairo streets during two years of Egypt’s ongoing political unrest. Based on more than 1,600 hours of footage, the film tags along with several revolutionaries—among them Ahmed, a fiery grassroots activist, Magdy, a member of the Muslim Brotherhood, and Khalid, a foreign-born actor—as they struggle against a suffocating regime and attempt to breathe new life into Egypt’s governance.

The Square made headlines when it became Netflix’s first major film acquisition—it will stream exclusively through the service starting January 17—and also because its only scheduled public screening in Egypt was canceled at the last minute. The country’s censorship board still hasn’t give Noujaim, whose past work includes Control Room and Rafea: Solar Mama, permission to screen the film in public.

The doc’s narrative arc initially hinged on the deposition of Hosni Mubarak and subsequent election of Mohamed Morsi as president. But history is often messier than we would wish to tell it. In January 2013, as Noujaim scrambled to meet her Sundance deadlines, she learned that her main characters “were back in the streets again saying, ‘Morsi is using the tools of democracy to create another dictatorship.'” The story wasn’t over.

The outcome of Egypt’s revolution is still hazy as the political pendulum continues to swing—the military is back in charge for now. So The Square, which Noujaim reworked with footage from Morsi’s unraveling, changed from being a film about the toppling of a regime to one about the will of people to change their situation. “People are fighting for dignity, for social justice, to create an egalitarian society” producer Karim Amer told me in November. “That’s a process of people claiming their rights, and it can take years before you can actually accomplish the goals of the movement.”

To capture this theme of democracy as a layered, evolving process, Noujaim included, throughout the film, scenes of a mural being painted—which is fitting, given the huge role of graffiti and street art in the Tahrir Square uprisings. As each new “phase” of the revolution begins, the muralist paints over his previous tableau, creating a palimpsest and a symbol of history being revised. 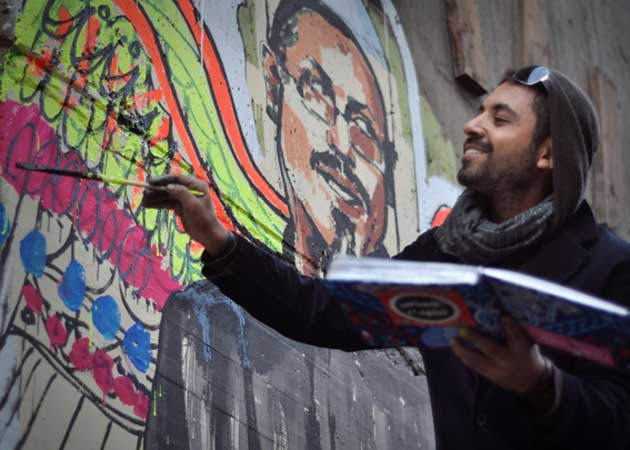 Although he maintains a low profile on camera, featured muralist Ammar Akbo Bakr is a well-known street artist and teacher from Luxor, where people have been painting on walls for 5,000 years. “He’s a whole film on his own!” Noujaim exclaims. Egyptians began noticing Abo Bakr because, during the bigger battles in Tahrir Square, “he was just continually painting these ever-changing murals” amid the tear gas and flying bullets.

A government curfew made it logistically difficult to find a good time to film Abo Bakr painting in the street, Noujaim says. So her crew built a wall on the balcony of an apartment and staged the painting scene there. (The producers later raised money on Kickstarter by auctioning off pieces of the colorful wall.) In the film, the mural becomes a mini-Tahrir. “The square to us was this kind of canvas,” Noujaim says. “Different people express different things, different people control it. To understand the square is to understand the process and the different layers of it, not to get obsessed with just the moment.”

Abo Bakr is known as a particularly witty and rebellious artist, focused on the role graffiti can play in resistance movements. When the Muslim Brotherhood was in power, Noujaim recounts, their minions would whitewash the murals. So Abo Bakr painted on one wall a Koranic verse that translated roughly to mean: “Beware of people that come cloaked in religion trying to manipulate.” When the Brotherhood’s cleanup crew arrived, they couldn’t whitewash it because they were prohibited from covering up religious verse.

Painting isn’t the only form of expression celebrated in The Square. “As long as there’s a camera, the revolution will continue,” says Ahmed, one of Noujaim’s main characters, who doubled as a cameraman during the most violent street scenes. (When he gets clobbered, the screen goes black.) Social media sites like Facebook feature prominently, as do songs by Ramy Essam, whose music some consider the “soundtrack to the revolution.”

Toward the end of the film, people revel in the streets as Morsi is deposed, as Mubarak was before him. This time Noujaim casts a darker mood, more unsettled. But I was glad for that. To tie up the story in a triumphant bow would have cheapened the experiences of Egypt’s revolutionaries, who are engaged in an ongoing battle against a power structure that would rather see them silenced.