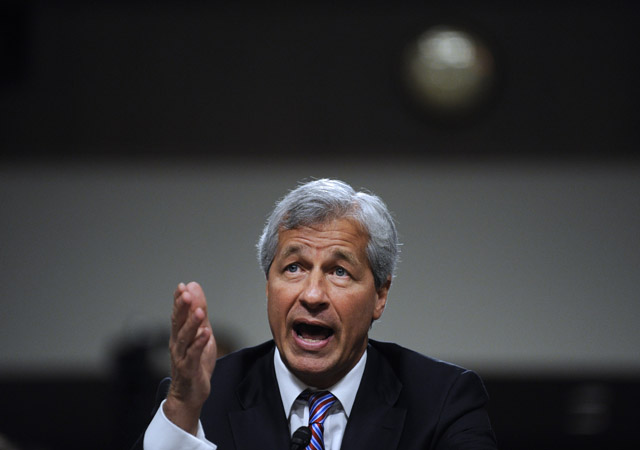 The New York Times reported Friday that Jamie Dimon, the silver-haired CEO of JPMorgan Chase, the nation’s largest bank by assets, is getting a raise. Dimon is poised to add a few million to the $11.5 million compensation package he took home in 2013.

If you so much as glanced at the news last year, this bit of news may puzzle you. JPMorgan, in many ways, had a miserable 2013. JPMorgan paid $1 billion in fines in the wake of the “London Whale” scandal, in which the bank lost $6 billion on a market-rattling blunder by a trader named Bruno Iksil. The bank also paid $13 billion to settle charges that it’d peddled risky mortgage-backed securities. And it forked over another $2 billion to settle charges for failing to spot Bernie Madoff’s ponzi scheme, which Madoff perpetrated largely using JPMorgan accounts. All told, the bank paid out roughly $20 billion in penalties to federal regulators over a slew of screw-ups and failures.

2013 was a rough year for JPMorgan. So why is Dimon getting a raise? The answer, in part, will make your blood boil. Here’s the money quote in the Times:

Mr. Dimon’s defenders point to his active role in negotiating a string of government settlements that helped JPMorgan move beyond some of its biggest legal problems. He has also solidified his support among board members, according to the people briefed on the matter, by acting as a chief negotiator as JPMorgan worked out a string of banner government settlements this year.

Mr. Dimon’s star has risen more recently as he took on a critical role in negotiating both the bank’s $13 billion settlement with government authorities over its sale of mortgage-backed securities in the years before the financial crisis and the $2 billion settlement over accusations that the bank turned a blind eye to signs of fraud surrounding Bernard L. Madoff.

Just hours before the Justice Department was planning to announce civil charges against JPMorgan over its sales of shaky mortgage investments in September, Mr. Dimon personally reached out to Attorney General Eric H. Holder Jr.—a move that averted a lawsuit and ultimately resulted in the brokered deal. Just a few months later, Mr. Dimon acted as an emissary again, this time, meeting with Preet Bharara, the United States attorney in Manhattan leading the investigation into the Madoff Ponzi scheme.

In other words, as big as those multibillion-dollar settlements were, JPMorgan board members believe the bank’s legal problems could’ve been worse. Blast-a-hole-in-our-balance-sheet worse. And so Dimon’s pay bump is a reward for locking horns with bank regulators and federal authorities and hashing out settlement deals that were favorable to the bank. He’s getting a raise because he beat the regulators, played them so well, JPMorgan board members seem to be saying, that he deserves to be rewarded for the deals he helped engineer.

There are other factors, too. Despite its legal headaches, JPMorgan’s stock price climbed 22 percent over the past year, and the bank recorded profits of $17.9 billion in 2013. But to read that Dimon’s savvy negotiating has won him a raise—and don’t forget that no top bank executives have gone to jail for actions related to the 2008 financial meltdown—brings to mind the old Dick Durbin quote about banks and Washington: “They frankly own the place.”