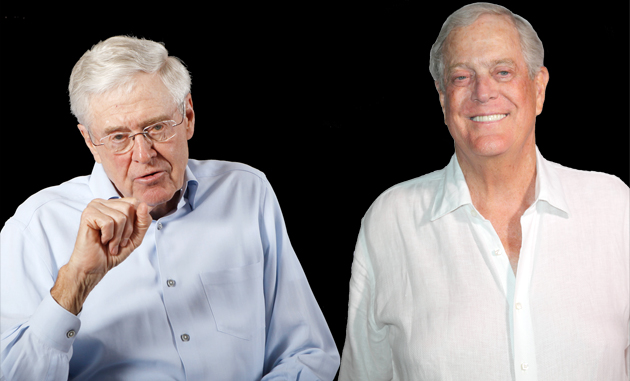 A new political consulting firm with deep ties to the Koch brothers has quietly set up shop in Arlington, Virginia. Its mission: to prevent future Todd Akins and Richard Mourdocks from tanking the Republican Party’s electoral prospects. The firm, named Aegis Strategic, is run by a former top executive at Charles and David Koch’s flagship advocacy group, Americans for Prosperity, and it was founded with the blessing of the brothers’ political advisers, three Republican operatives tell Mother Jones.

The consulting firm plans to handpick local, state, and federal candidates who share the Kochs’ free-market, limited-government agenda, and groom them to win elections. “We seek out electable advocates of the freedom and opportunity agenda who will be forceful at both the policy and political levels,” the company notes on its website. Aegis says it can manage every aspect of a campaign, including advertising, direct mail, social media, and fundraising.

Aegis’ president is Jeff Crank, a two-time failed Republican congressional candidate who ran the Colorado chapter of Americans for Prosperity and served as the chief operating officer of the national organization. The firm’s six-person staff boasts two others with connections to the Kochs. The group’s lead strategist is Karl Crow, a former project coordinator for the Charles G. Koch Charitable Foundation, where he focused “on how political advocates for economic freedom are identified, trained, and promoted,” according to his bio on Aegis’ website. Crow, who was scheduled to speak at an invite-only Koch donor summit in 2010 on the subject of voter mobilization, subsequently worked for Themis, the Koch brothers’ voter microtargeting operation. Brad Stevens, the former state director for Americans for Prosperity-Nebraska, is Aegis’ director of candidate identification.

Crank has touted his firm’s connection to the Kochs in meetings with potential business partners, according to three people who’ve spoken with him about this new venture. They say he has promoted Aegis as having the approval of the Koch brothers’ political operatives. (A spokesman for Koch Industries did not respond to a request for comment about the Kochs’ ties to Aegis.)

In an interview, Crank downplayed his company’s Koch connections but did not dispute the accounts of those who say he mentioned Aegis’ Koch affiliation. “I think there’s some kind of an assumption that there is [a Koch connection],” Crank said. “It’s not a large leap for anybody to make.” Crank said he launched Aegis after seeing Akin, Mourdock, and other Republican candidates bumble their way through the 2012 campaign and cost the GOP seats in Congress.

Aegis Strategic’s first client is Marilinda Garcia, a 31-year-old Republican serving her fourth term in the New Hampshire House of Representatives. Last November, she launched a bid for Congress, hoping to oust freshman Democrat Rep. Ann Kuster. Garcia, who has been loudly praised by her state’s Americans for Prosperity chapter, declined to comment. Crank told Mother Jones that Aegis will announce new clients in the coming months.

People who’ve spoken with Crank about Aegis say he told them that the firm has access to the Kochs’ formidable donor network, and Aegis’ website appears to allude to this. Noting the “services” it provides, the consultancy says that its fundraising team “takes on a limited number of candidates each election cycle and markets them to Aegis’ exclusive fundraising network.”

When asked about this statement, Crank questioned whether that language in fact appeared on Aegis’ website. When informed that it did, he called it “standard marketing stuff.”

As the Washington Post recently reported, the Kochs’ political network raised more than $400 million in 2011 and 2012 to defeat President Barack Obama, influence House and Senate races, and shape policy debates at the state and federal levels. The constellation of nonprofit groups used by the Kochs and their allies is mind-bendingly complex, seemingly designed to keep donors’ identities shielded from public scrutiny.

Aegis Strategic comes across as an effort by the Koch brothers’ allies to bring in-house the business of campaigns. On its website, Aegis bills itself as a one-stop shop for candidates who are “committed to freedom and economic opportunity,” offering candidates such services as opposition research, fundraising, direct mail, TV/radio/cable advertisements, phone banking, data management, and social media. The company’s office is located just blocks from Americans for Prosperity’s national headquarters, the offices of various Koch-funded foundations, and Freedom Partners, the primary vehicle for anonymous money raised by the Koch donor network.

Pledging to identify and train budding conservative and libertarian candidates, Aegis potentially fills a gap that the Kochs have previously identified in their political operation. Donors and activists who are active in the Koch network say there was widespread frustration following the 2012 elections, during which the GOP had fielded so many lackluster candidates. “You can spend all the money on a candidate you want, but if they’re talking about self-deportation, or betting $10,000, or 47 percent, you’re gonna lose,” says Stan Hubbard, a Minnesota-based radio and TV magnate who attends the Koch seminars. “You have a bad candidate, you’re gonna lose.”

At the Kochs’ April 2013 donor summit, the first since the 2012 elections, one major topic of conversation was “candidate recruitment and training,” according to an email previewing the summit that was first reported by Mother Jones. That preview, written by the Kochs’ top fundraiser, Kevin Gentry, said that at the conference “a plan will be shared to help recruit more principled and effective advocates of free enterprise to run for office.”

A little over a month later, corporate records show, Aegis Strategic was officially incorporated in Delaware.