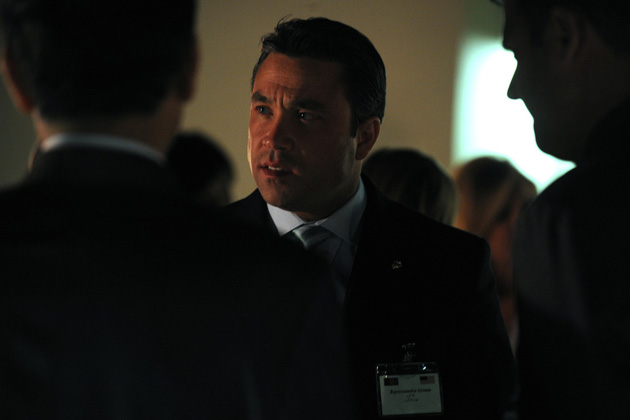 Rep. Michael Grimm (R-N.Y.) upstaged the president’s State of the Union address last night. In an interview following the speech, the Staten Island representative threatened to toss Michael Scotto, a New York television reporter, over a balcony in the Capitol. The NY1 reporter’s offense? Asking the congressman about allegations of campaign finance violations. “You’re not man enough,” Grimm said, while moving threateningly toward the reporter. “I’ll break you in half. Like a boy.”

Grimm’s opponent quickly jumped on the comments, calling the tiff a “shameful abuse of power.” Grimm has publicly apologized and invited Scotto to lunch. Grimm is hardly the first congressman with a temper, but his brief political career—first elected to Congress in 2010 and one of the eight candidates MoJo couldn’t believe would actually win in 2012—has been defined by bizarre tales of Grimm’s outbursts and associations with shady individuals.

That Time He Waved A Gun Around A Nightclub

In 2011, Evan Ratliff wrote an excellent deep-dive profile of Grimm for the New Yorker. Ratliff’s article examined the full extent of the corruption charges against Grimm, but the highlight of the piece was a 1999 incident during which Grimm supposedly stormed into a Queens nightclub after an altercation with a date’s ex-husband. According to the story, Grimm was kicked out by the club’s bouncer, but he returned later with a posse and went bonkers:

Around 2:30 a.m., there was a commotion on the dance floor. According to Williams, somebody was shouting, “He’s got a gun!” Following a crowd into the club’s garage, Williams discovered that Grimm and the husband had returned, and Grimm was holding a weapon. Grimm was “carrying on like a madman,” Williams said. “He’s screaming, ‘I’m gonna fuckin’ kill him.’ So I said to him, ‘Who are you?’ He put the gun back in his waist and said, ‘I’m a fucking F.B.I. agent, ain’t nobody gonna threaten me.’ ” (Grimm said he only moved his gun from an ankle holster to his waistband.) The bouncer at the front door told Williams that, when he patted Grimm down and found his gun, Grimm had showed his F.B.I. identification. The bouncer then let him pass through the club’s metal detector.

Grimm left the club, but at 4 a.m., just before the club closed, he returned again, according to Williams, this time with another F.B.I. agent and a group of N.Y.P.D. officers. Grimm had told the police that he had been assaulted by the estranged husband and his friends. Williams said that Grimm took command of the scene, and refused to let the remaining patrons and employees leave. “Everybody get up against the fucking wall,” Williams recalled him saying. “The F.B.I. is in control.” Then Grimm, who apparently wanted to find the man with whom he’d had the original altercation, said something that Williams said he’ll never forget: “All the white people get out of here.”

In between his career as an FBI agent and his first political campaign, Grimm opened an Upper East Side restaurant. He co-owned Healthalicious with his friend Bennett Orfaly, who has since been accused of having ties to a locked-up Gambino family mobster nicknamed Fat Tony (real name Anthony Morelli). It’s unclear if Grimm himself had any dealings with the Sopranos character Morelli, but Orfaly’s friendship with the mafioso came to light thanks to a federal investigation into whether Ofer Biton, a Grimm fundraiser and Israeli citizen, illegally funneled contributions to Grimm’s campaign in exchange for green cards for foreigners.

The Other Time Grimm Yelled At a Reporter

National Journal reporter Marin Cogan recalled her own run-in with Grimm after his Tuesday outburst. In an article titled, “That Time Michael Grimm Yelled at Me,” Cogan explains how she interviewed Grimm in 2011 and published a quote of the congressman dissing the tea party wing of his caucus. Grimm wasn’t pleased when Cogan published the quote and called her to complain:

It’s been a few years since this happened, and I don’t remember all of the details. I do remember him repeatedly yelling that he “did not serve 10 years in the FBI!” to have to put up with something like this. To be clear, at no time did I feel threatened, nor did I feel particularly scared or upset–although that seemed pretty clearly to me to be what he was trying to accomplish. I was a little shocked, but I gave as good as I got, and he took it to my editor, and we eventually settled on this blog post where he got to clarify his claims. Compared to last night’s outburst, it was pretty tame. Still, I’ve never dealt with anyone so angry before, or since.

Why did Scotto’s question on Grimm’s campaign finance anger the congressman anyway? Grimm’s entire political career has been dogged by several investigations mounted by the FBI, the Federal Election Commission and the House ethics committee. Grimm failed to report a free trip to Cyprus paid for by a businessman arrested on corruption charges and broke House rules when he included a video of a floor speech in a fundraising e-mail. His ex-girlfriend was arrested earlier this month for making straw donations to his campaign. Citizens for Responsibility and Ethics in Washington has named Grimm to their “Most Corrupt” list for the past three years.