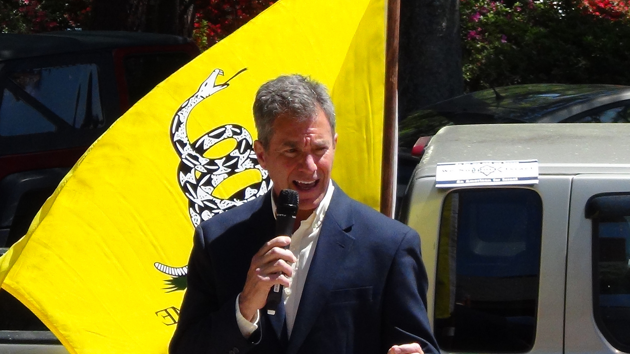 So a recent jury verdict that held Brannon responsible for misleading two investors who gave him a quarter million dollars is quite a blow to the image Brannon has tried to craft of a crusader for better financial decisions in government.

Brannon, a full-time OB-GYN, is best distinguished from the rest of the GOP primary candidates vying to replace Democratic Sen. Kay Hagan by his extreme beliefs: He has said public education “does nothing…other than dehumanize” students and that food stamps are “slavery.” Recent GOP primary polls have Brannon trailing the front-runner, North Carolina House Speaker Thom Tillis, by single digits. Endorsements from Sen. Rand Paul (R-Ky.) and conservative leaders such as RedState editor Erick Erickson have given Brannon a significant fundraising boost.

His legal troubles are linked to Neogence Enterprises, a defunct technology company Brannon cofounded several years ago. The company tried to develop a smartphone application which Brannon pitched as a “social augmented reality network connecting people, places and things” and a once-in-a-lifetime investment opportunity. Last week, a civil jury concluded that Brannon had led two investors to believe that Verizon was considering preinstalling the application on certain smartphones. (The Raleigh News & Observer first reported the verdict.) Although Neogence pitched Verizon, the cellphone carrier never, in fact, made that offer.

The jury cleared Robert Rice, Neogence’s former CEO, of similar wrongdoing. Brannon’s case defense probably foundered due to emails he sent bragging of Neogence’s potential partnership with Verizon. “I know all of you are BUSY!!!” Brannon wrote in one email. “I need you to give a few minutes to look at this potential. THANK YOU for your TRUST!! Greg.”

The two investors who brought the suit are a former classmate of Brannon’s from medical school, Larry Piazza, and the husband of one of Brannon’s patients, Sam Lampuri. In court, Lampuri, a Raleigh plumber who gave Brannon $100,000, testified that Brannon “pretty much spoke about Neogence every time my wife was in stirrups.” Brannon must now repay Piazza and Lampuri a total of $250,000 plus interest.

Brannon has boasted about his personal connection with his patients before. In a fall 2013 fundraiser for Hand of Hope, his nonprofit crisis pregnancy center, Brannon said, “When I see little girls that come here, boyfriends that do show up are my favorites. Then I can whoop on them with love. How many people have we got married over the last 20 years just by riding that boy’s rear end?”

Brannon’s campaign did not respond to requests for comment last week. In the run-up to the trial, Brannon told the News & Observer, “I can’t wait for my day in court.” After the verdict, he said, “I cannot wait to go to the appeal process.”