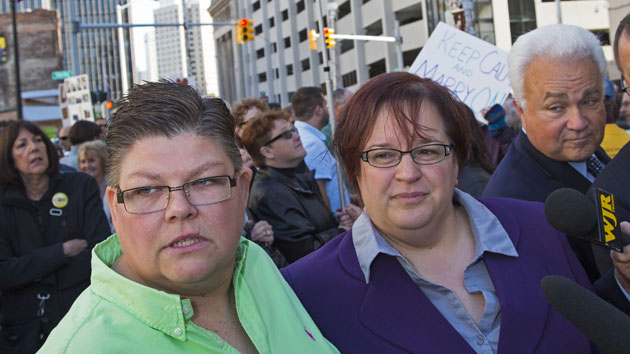 Jayne Rowse (left) and April DeBoer talk to reporters outside the Federal Courthouse before a judge heard arguments on their lawsuit challenging the constitutionality of Michigan's ban on same-sex marriage and adoption by same-sex couples.Jim West/ZUMA Wire

Update, Saturday, March 22, 2014, 5:05pm ET: A federal appeals court has issued a temporary stay of Judge Friedman’s ruling until the 26th. That means that the issuance of marriage licenses to same-sex couples in Michigan is suspended until at least Wednesday.

Same-sex couples may soon be able to wed in Michigan, following a ruling by US District Judge Bernard Friedman finding the state’s ban on gay marriage unconstitutional. Michigan Attorney General Bill Schuette has asked the courts to freeze Friedman’s ruling while the state pursues an appeal. Since December 2013, courts have also ruled against gay-marriage bans in Texas, Utah, Oklahoma, and Virginia.

The animated map below shows how marriage equality is spreading across the country. Read more about that here.