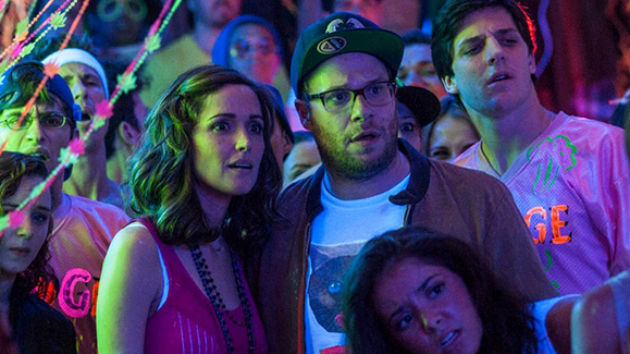 When you think of the greatest on-screen couples in TV and cinema history, a handful of pairs jump to mind: Bergman and Bogart in Casablanca. Cusack and Skye in Say Anything… Chandler and Britton on Friday Night Lights.

You can add Rogen and Byrne to the list.

In the new comedy Neighbors (directed by Nicholas Stoller), Seth Rogen and Rose Byrne play Mac and Kelly Radner, a married couple struggling to adjust to a new era of parenthood. When a rowdy fraternity—led by Teddy Sanders (Zac Efron) and Pete Regazolli (Dave Franco)—moves in next door, the two houses go to war in hilarious fashion.

Although the film’s advertisements don’t make it look bad, necessarily, Neighbors is much smarter and emotionally deeper than its TV spots and trailers would have you believe. But what sets the movie over the top is the pairing of Rogen and Byrne. As the two plot and execute their campaign of revenge against the frat boys next door, their moments of scheming are infused equally with a delightful chemistry and a sense of strained, fumbled maturity.

And the reason this works so well is because the filmmakers didn’t treat the female lead as a comic prop or as some stereotypical wet blanket, as is the case with so many male-centric comedies: She’s as devious and committed as the boys. “From the start, they wanted to make my character very much a part of the story,” Byrne told the New York Times. “From Day 1, Nick [Stoller, the film’s director] and Seth were both like, ‘She’s as in on this as everybody else—and as irresponsible as everybody else.’ That was really exciting.”

You can catch glimpses of the Radners doing there thing here:

Their best scenes actually have nothing to do with plotting physical destruction against their neighbors. In one sequence, Kelly and Mac awake following a night of heavy drinking. A hungover Kelly goes to breastfeed their newborn, only to have Mac intervene, warning her that at this hour her breast milk would be like a “White Russian.” In pain from the excess milk, she orders Mac to milk her. The sequence, including the aftermath of the deed, is a thing of comic beauty—chaotic, appropriately horrifying, and just cute enough.

Anyway, the whole movie is very good. TheWrap calls it, “an instant classic.” Slate dubs it, “a surprisingly progressive take on bro privilege that still has lots of dick jokes.” I’m inclined to agree.