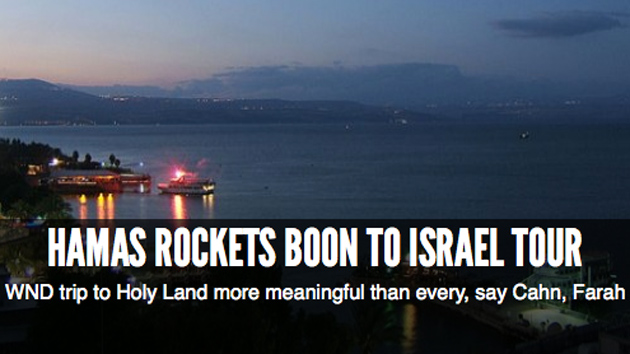 Israel’s ground offensive into Gaza, which began last Thursday after a week of air strikes, has come with a heavy price: 20 Israelis and 445 Palestinians have now died since the conflict flared up two weeks ago. But at least one group is happy about the news—WorldNetDaily, the far-right website, which reports, in a story titled “Hamas Rockets Boon to Israel Tour,” that the ground offensive has been good for business:

WASHINGTON – During the week Hamas fired thousands of rockets on Israel, interest in WND’s Israel tour with Joseph Farah and Jonathan Cahn spiked, with 68 signups in seven days, the most in a one-week period since registration began in February, WND announced.

“I thought news of thousands of rockets raining down on Israel would be a deterrent to Americans who were thinking about joining us on WND’s Israel tour,” said Farah. “It wasn’t at all. In fact, it seems like Americans are eager to show solidarity with the Jewish state at this time.”

The second annual tour is on pace to match last year’s size, with nearly 400 participants, most originating in the U.S.