Food-safety experts at Consumer Reports crunched the numbers on mercury levels in seafood—and they have a new recommendation for pregnant women: Don’t eat tuna at all.

The FDA recommends that pregnant and nursing women consume between 8 and 12 ounces of fish per week to provide proper nutrition for a baby’s brain development and overall health. But some fish are very high in mercury, a neurotoxin that can lead to serious cognitive problems and birth defects in children and babies. And the mercury levels in oceans are rising—humans have tripled the mercury content in oceans since the Industrial Revolution—leading to further mercury absorption by predators like tuna. 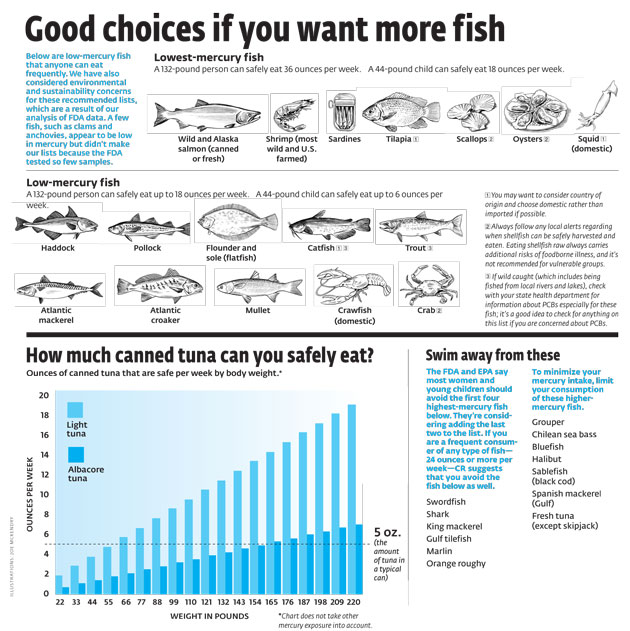 A team at the Consumer Reports National Research Center analyzed data from the Food and Drug Administration’s chart on mercury levels in seafood and determined that consuming 6 ounces of albacore tuna in a week—the level recommended as safe by the FDA for pregnant women—would put a 125-pound woman over the Environmental Protection Agency’s “safe” mercury threshold by more than two ounces.

Canned light tuna is thought to offer a lower mercury tuna option, but 20 percent of the FDA’s samples of it contained almost double the average level of mercury that it’s supposed to. Some samples had more mercury than the king mackerel—one of the FDA’s top four high-in-mercury fish—which the agency advises pregnant women and children to avoid. Canned tuna constitutes the second most frequently consumed seafood product in the United States.

Some experts like Deborah Rice, a former senior risk assessor for the EPA, think that research since 2001 suggests that there is “no question” that the FDA and EPA’s current limit for mercury consumption is “too high,” she told Consumer Reports. The magazine is urging the FDA and EPA to recommend that pregnant women avoid eating any tuna—and to provide more safety information concerning tuna for pregnant women, children and people who eat a lot of fish (24 ounces of fish, around seven servings, or more per week).