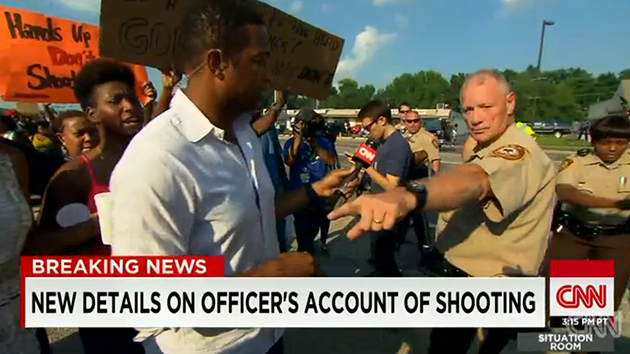 Dan Page of the St. Louis County Police Department and CNN anchor Don Lemon moments before Page pushed Lemon and others during protests in Ferguson.Video still courtesy of <a href="http://situationroom.blogs.cnn.com/2014/08/18/cnn-reporter-ordered-to-move-by-police/?iref=allsearch">CNN</a>

More controversial audio has surfaced from Dan Page, the St. Louis County Police officer who pushed CNN’s Don Lemon in Ferguson on August 18 and was put on administrative leave after video surfaced of him talking about being “a killer,” calling President Obama “undocumented,” and disparaging Muslims.

The additional audio, found and highlighted on August 23 by left-wing advocacy and research group Political Research Associates, goes deeper into his beliefs that the United States is in danger of being folded into a one-world government after a series of orchestrated events, and that “99.9 percent” of sexual assault in the military is “bogus.” The audio comes from interviews Page did in July with Rick Wiles on the TruNews radio show, an end-times and right-wing conspiracy-theory forum, and in May with the John Moore Radio Show.

On the Department of Homeland Security’s definition of a terrorist:

On a planned chain of events leading to a military takeover of the United States:

I’ve heard talk from very, very high sources that there is a timeline starting in 2015…you have to be very watchful of created, orchestrated events within the United States…so there’s going action taken, I suspect within the continental United States and abroad, that’s going to create such havoc worldwide that people are going to demand some form of protection from the federal government. That’s what I suspect is coming. And this thing on the border right now with the illegals I think might be part of that.

On sexual assault in the military:

You’ve got Sen. Claire McCaskill right now beating the podium about assaults in the military and probably 99.9 percent of these things are bogus. One only need to look at a woman in a way that she feels uncomfortable and that’s considered sexual assault in the military.

Rachel Tabachnick, the PRA fellow who pointed out this radio interview, notes that Page says the crisis with unaccompanied children and the wider scenario includes nuclear suitcase bombs, a planned North American Union, and, of course, further “demonization of Caucasian Christians.”

“Page expresses his belief that the flood of immigrant children is a clandestine operation with the purpose of programming American citizens for the eventual rounding up and imprisonment of their own children,” Tabachnick wrote.

Listen to the full audio from TruNews here:

Listen to the full audio from the John Moore Radio Show here: