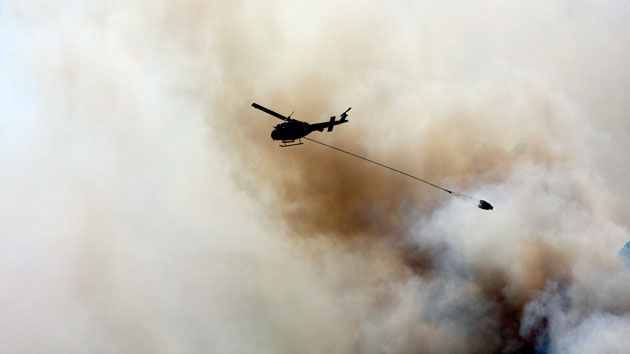 A helicopter drops water on a wildfire in Oregon The Oregonian, Stuart Tomlinson/AP

Wildfires are raging around the western United States: As of yesterday, more than 10,000 firefighters were battling 20 fires in Oregon and California. Another fire in Washington state recently grew to cover more than 8,000 acres. While the immediate consequences of the blazes are obvious—scorched earth, destroyed homes, millions of dollars in damages—the longer-term consequences for the climate have, until now, been poorly understood.

In a study published at the end of July in the Journal of Geophysical Research, Mark Jacobson, a Stanford University engineer, says the burning of biomass like trees, plants, and grass—either by accident or deliberately (often to create room for agriculture)—creates 18 percent of all human-caused carbon emissions. Worse yet, that pollution kills people: Around the world, Jacobson writes, biomass burning may account for 5-10 percent of all air pollution deaths worldwide, or about 250,000 people annually.

Lightning strikes and lava flows can burn down forests just as effectively as campfires, cigarettes, and slash and burn agriculture. But worldwide, Jacobson notes, the proportion of wildfires that are caused by nature could be as low as 3.6 percent. The rest are started by humans.

Possibly the worst news of all: Wildfires are part of a vicious circle. Emissions from fires cause climate change, which leads to drier conditions—which make it easier for humans and nature to start fires and for those fires to spread.