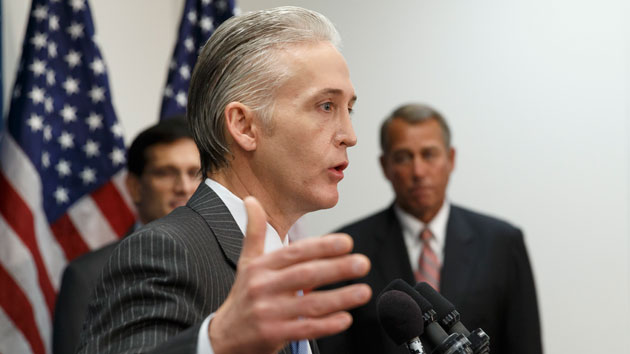 Benghazi! It’s back. On Wednesday, the select committee on Benghazi set up by House Speaker John Boehner—who yanked this conservative crusade from Rep. Darrell Issa (R-Calif.) and handed it to Rep. Trey Gowdy (R-S.C.)—will stage its first public hearing. In a surprising move that might disappoint right-wingers yearning for proof that Benghazi is Obama’s Watergate (or worse!), the session will not focus on whether the White House purposefully misled the public about the attacks on the US diplomatic compound in that Libyan city that claimed the lives of Ambassador Chris Stevens and three other Americans. Nor will it probe the favorite right-wing talking point that President Barack Obama or Hillary Clinton, for God-knows-what reasons, ordered US forces to stand down and not respond to the murderous assault. Instead, the committee will examine the State Department’s implementation of the recommendations made by the Accountability Review Board, an independent outfit that investigated the attack and in late 2012 issued proposals for improving security for American diplomats and US diplomatic facilities overseas. And the idea for this first hearing came from…a Democrat.

After Boehner in May announced the formation of a special committee—after various GOP-led congressional panels had already investigated the Benghazi tragedy—the House Democrats considered not participating in the new inquiry, which seemed not much more than an attempt by Boehner to placate tea partiers and conservatives for whom the Benghazi affair had become a top priority. But the House Dems eventually decided to join the committee—which was budgeted a whopping $3.3 million—and Rep. Adam Schiff (D-Calif.) was one of the Ds placed on the committee by House Minority Leader Nancy Pelosi. Schiff scoffed at the need for further investigation of the attack. But, as he said in early August on Rachel Maddow’s MSNBC show, there was something productive the committee could do: review how the State Department has handled those ARB recommendations. Gowdy agreed. Presto, a hearing on substance, not conspiracy theories.

In an email to Mother Jones, Amanda Duvall, a spokeswoman for Gowdy, confirms that beginning the hearings this way was Schiff’s idea and that Gowdy accepted it.

The ARB—which was led by former Ambassador Thomas Pickering and retired Adm. Michael Mullen—was tough on the State Department. It noted, “Systemic failures and leadership and management deficiencies at senior levels within two bureaus of the State Department…resulted in a Special Mission security posture that was inadequate for Benghazi and grossly inadequate to deal with the attack that took place.” And the board pointed out that senior State Department officials “demonstrated a lack of proactive leadership and management ability.” Its unclassified report listed 24 recommendations (and a classified report added another five) for beefing up diplomatic security. For instance, the board noted that the State Department should establish a panel of outside experts with military and security experience to identify best practices and regularly evaluate US “security platforms in high risk, high threat posts.”

This past January, the State Department issued an update on how it was implementing the ARB recommendations. State noted that it had “accepted each of the ARB’s recommendations and is committed to implementing them.” It reported that the work was “already well underway.” It’s certainly a proper and important task of Congress to evaluate the State Department’s progress. Such oversight—which entails examining bureaucratic reorganization with the department—is not likely to produce fireworks and explosive headlines damaging for Obama and Clinton (though some are trying). And if this iteration of the Benghazi witch hunt yields improved oversight that bolsters security for US diplomats abroad, then Gowdy and the Republicans will deserve credit.

But Gowdy has apparently not given up on reshaping the conventional, no-smoking-guns narrative on Benghazi. He recently told a South Carolina newspaper, “I know I’m biased, but one of the good parts about running an investigation in a way that appears to be serious-minded is that witnesses who were previously unavailable or not interested in cooperating are now interested in cooperating. The universe of witnesses is expanding.”

Yet Gowdy, according to Hill sources, has not held one meeting with Democratic members of the committee to discuss what he intends to do next. He has not proposed any timetable for the committee’s investigation or presented any scope for his probe. He is initiating hearings without first drafting a game plan. Gowdy has publicly indicated his investigation could continue until 2016—that is, well into the next presidential campaign in which Hillary Clinton could be a leading contender.

Meanwhile, the Democrats on the Benghazi committee, led by Rep. Elijah Cummings (D-Md.), have not just been waiting to hear from Gowdy. Their staffers spent the summer creating a website called “Benghazi on the Record: Asked and Answered.” The highly functional, image-drenched, user-friendly site—staffers say it works well on mobile devices—features 13 of the key questions posed by Benghazi-ists: why was security in Benghazi inadequate despite repeated requests for assistance, what role did that anti-Islam video play, was a stand-down order issued, why were fighter jets not dispatched to save lives, did then-UN Ambassador Susan Rice intentionally misrepresent what led to the attack, and so on. Click on a question, and you’ll be directed to a page quoting those GOPers who have raised the matter and a list of sources (including Republican-run investigations) that have answered the question. The database covers about 200 statements made by 50 Republican senators and representatives, including Gowdy, Boehner, John McCain, and Darrell Issa. House Democrats expect the site to go live via the committee Democrats’ home page on Tuesday—the day before the hearings start.

The point is obvious: to show that the main questions repeatedly tossed out by the GOP have indeed already been addressed and that Gowdy’s investigation is not necessary. Of course, the site comes with a hashtag: #BenghaziAnswered.