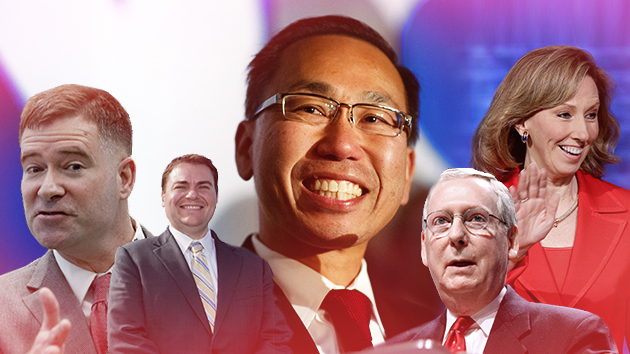 When Democrats tout their strength among minority voters, they’re usually referring to African Americans and Latinos, but over the past few elections Asian Americans have increasingly gone blue as well. Now, a new group is seeking to thwart that trend. The Asian Republican Coalition launched with a splashy event at the Newseum in Washington, DC, in May, drawing GOP heavy-hitters including Sens. John Cornyn, Tim Scott, and Tom Coburn. And last week, the group announced its first set of endorsements, backing five Republican candidates across the country.

Yet, the Asian Republican Coalition appears to be in an awkward position: It seems unable to find many people of Asian descent to endorse or support its cause.

Take their recent batch of endorsements. Of the five Republicans who earned the group’s backing, only one candidate is Asian American—Allan Fung, the gubernatorial candidate in Rhode Island. The group also endorsed incumbents Sen. Mitch McConnell of Kentucky and Rep. Chris Gibson of New York, along with House candidates Carl DeMaio in California and Barbara Comstock in Virginia.

Political groups that advocate for minority causes often endorse candidates who don’t share the same ethnicity but are friendly to their cause. McConnell’s wife is a Chinese expat (and former Bush administration Cabinet official), while DeMaio and Comstock are running in districts with large Asian American populations. “These candidates believe in creating and building upon strong relationships within the comprehensive Asian American community,” said John Ying, an Asian American investment banker based in Hong Kong and the group’s chairman.

But when his group held its kickoff party, apart from Ying the scene reportedly was full of white politicians and consultants. “We have a very broad definition of what constitutes the Asian American community,” the group’s vice chairman, Thomas Britt, told Vice. “The Asian Republican Coalition is open to all Americans, including Asian Americans and those of us like me who are not ethnically Asian but have spent 20 years living in Hong Kong.”

Back in the early 1990s, Asian Americans skewed slightly Republican, voting 55 percent for George H.W. Bush in 1992. Asian Americans had turned more Democratic by the time his son ran a decade later, voting 54 percent for Al Gore. In 2012, Barack Obama won 73 percent of the Asian American vote, an 11 percent rise from his 2008 performance.

Asian Americans don’t represent as large of a voting bloc as African Americans and Latinos (they constituted just 3 percent of the national vote in 2012), but they’re the fastest-growing segment of the US population—and Asian Americans are considered very reliable when it comes to voter turnout. A survey released earlier this week by APIAVote and Asian Americans Advancing Justice suggested that Asian American turnout of registered voters will range from 60 to 77 percent for the midterms. Of those likely voters, 42 percent plan to vote Democratic in this year’s House races, compared to 28 percent of Asian American voters planning to back Republicans.

As a whole, Asian Americans are richer and have higher educational levels than other ethnic groups, making them a prime target in the view of conservatives. “Frankly this group is nominally right now voting more Democratic, but in a very weak affiliation,” Ying told the Daily Caller. “These are not die-hard Democrats, and traditionally in the past they used to be Republicans.”

But it may not be so easy for Ying and the GOP, given that party’s agenda. A comprehensive Pew study from 2012 found that Asian Americans tend to prefer a larger government and robust social services. It’s not just a lack of outreach that’s holding the GOP back from winning over Asian American voters.