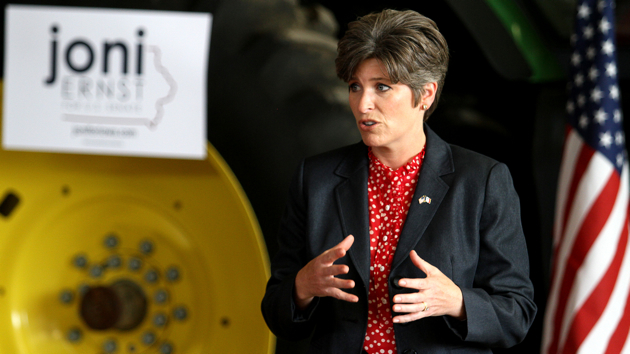 Joni Ernst has latched onto pretty much every idea favored by the tea party. On Thursday afternoon, while campaigning in western Iowa, Ernst endorsed another concept favored by the grassroots right: officially declaring the United States an English language country. “I think it’s great when we can all communicate together,” Ernst said when a would-be voter at a meet and greet in Guthrie Center, Iowa, asked if she’d back a bill making English the official national language. “I think that’s a good idea, is to make sure everybody has a common language and is able to communicate with each other.”

Ernst spent the day campaigning with Sen. Lindsey Graham (R-S.C.), one of the main architects of the comprehensive immigration reform bill that passed the Democratic-run Senate, but not the GOP-run House, in 2013. Ernst has opposed Graham’s bill to put some undocumented workers on a path to citizenship, and regularly attacks President Barack Obama’s possible use of executive authority to allow immigrants to remain in the country as “amnesty.”

Making English the official language is a longtime cause of Ernst’s fellow Iowa Republican, Rep. Steve King (Guthrie Center is just outside King’s congressional district). As a state senator in 2002, King pushed a law that made Iowa an English-only state. In 2007, King and Ernst, then a county auditor, sued Iowa’s then-secretary of state, Democrat Mike Mauro, for offering voter forms in languages other than English.