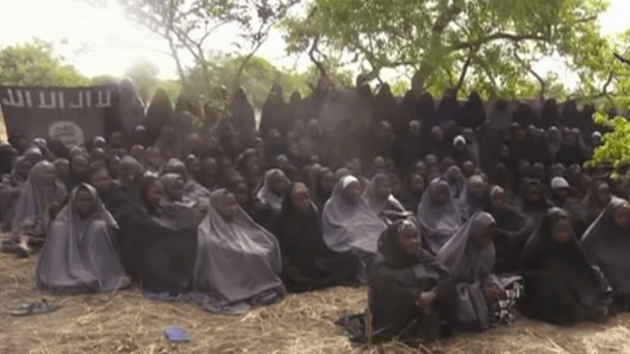 Some of the schoolgirls Boko Haram kidnapped in mid-April.AP

Update, Friday, October 24: The deal reached last week between the Nigerian government and Boko Haram appears to have fallen apart as reports surfaced Thursday that the Islamist militants had kidnapped dozens more women and children in northern Nigeria, and had broken the recently agreed-upon cease fire.

On Friday, Nigeria’s government announced it had reached a deal with Boko Haram to release the approximately 200 schoolgirls held captive by the Islamist terror group since April.

The agreement, announced by the country’s defense minister, also involves a cease fire between Boko Haram and Nigeria’s military. The government expects the terror group will not back out on the deal. “Commitment among parts of Boko Haram and the military does appear to be genuine,” an official with Nigeria’s security forces told Reuters Friday. “It is worth taking seriously.”

Boko Haram militants abducted more than 300 schoolgirls from Chibok boarding school in northern Nigeria in mid-April, sparking a worldwide outcry and propelling the group onto to the international stage for the first time. Over fifty of the girls escaped early on. The rest have remained in captivity ever since.

Boko Haram, whose name roughly means “Western education is sinful,” has been terrorizing Nigeria since 2009 in an effort to return the country to the pre-colonial era of Muslim rule. Over the past half-decade, the Islamist group has killed approximately 5,000 Nigerians the group regards as pro-government in attacks on schools, churches, and mosques, as well as military checkpoints, police stations, highways, and a bus station in the capital city of Abuja.