The number of homeless children in America reached nearly 2.5 million last year, an all-time high, according to a new report released by the National Center on Family Homelessness.

The report, titled “America’s Youngest Outcasts” and published Monday, concluded the current population amounts to 1 child out of every 30 experiencing homelessness. From 2012 to 2013, the number of homeless children jumped by 8 percent nationally, with 13 states and the District of Columbia seeing a spike of 10 percent or more. 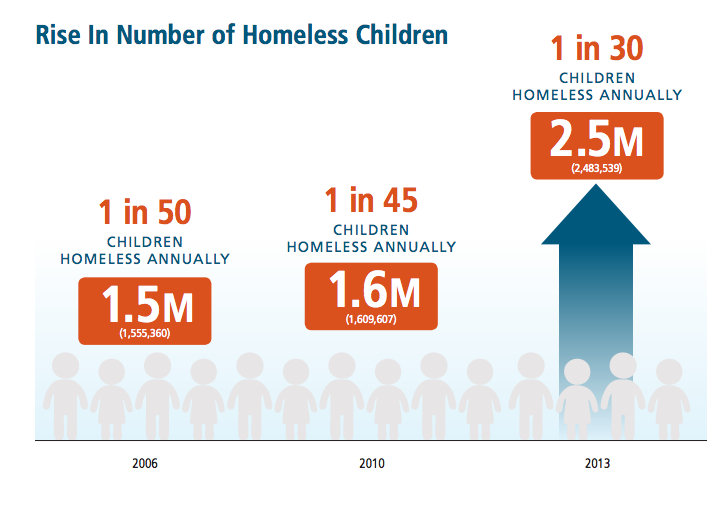 “The same level of attention and resources has not been targeted to help families and children,” co-author of the report and director of the center Carmela DeCandia told the Associated Press. “As a society, we’re going to pay a high price, in human and economic terms.”

Researchers behind the study cited several major drivers behind the recent surge including high poverty levels, insufficient affordable housing across the country, and traumatic stress experienced by mothers. Different reports have cited 90 percent of homeless mothers have been assaulted by their partners, with children overwhelmingly exposed to similar acts of violence.

According to Monday’s report, youth homelessness is particularly problematic in some parts of the South, Southwest, and California: