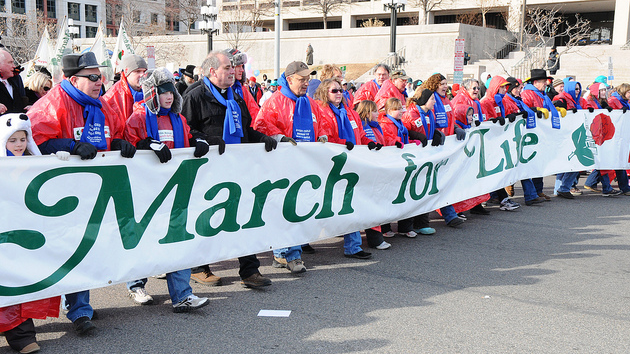 Each year on January 22—the anniversary of the Supreme Court’s ruling in Roe v. Wade—the March for Life draws thousands of protesters to Washington, DC, for what organizers bill as “world’s largest anti-abortion event.” But this year, there’s an added wrinkle: Organizers of the march have spent the past six months arguing that birth control pills are a form of abortion.

March for Life Education and Defense Fund, the nonprofit that organizes the annual protest, identified oral birth control as a form of abortion in a lawsuit filed in July. With the suit, which is ongoing, March for Life is fighting for an exemption from the Affordable Care Act mandate that all private employers provide contraception coverage.

March for Life argues that covering drugs or medical devices that cause abortions would violate its founding principles. And it places hormonal birth control, which includes things like oral contraception and vaginal rings, squarely within that category. In its lawsuit, the group refers to these as “abortifacients,” a characterization with which most physicians strongly disagree.

Polls consistently find that a majority of Americans who oppose abortion have no moral objections to birth control. Most of those planning to attend the march probably have no idea that March for Life views birth control as immoral: March for Life doesn’t advertise its opinions on birth control in its promotional material for the protest, and the group’s website simply bills the march as a mass demonstration against “legalized abortion on demand.”

The group’s lawsuit seems to have been inspired by the Supreme Court’s June 2014 decision in Burwell v. Hobby Lobby. In that case, Hobby Lobby’s owners sued to avoid covering intrauterine devices and emergency contraception pills. A 5-4 conservative majority on the high court ruled in favor of the craft chain’s owners, saying that certain privately owned businesses don’t have to cover emergency contraceptives if the owners object on religious grounds.

The next month, the Supreme Court went even further: It allowed organizations with objections to paying for any kind of contraception—not just the types of emergency contraception that the court dealt with in Hobby Lobby—to bring lawsuits against the contraception mandate. March for Life Education and Defense Fund filed its lawsuit five days after that expanded ruling.

Writing for the majority in Hobby Lobby, Justice Samuel Alito agreed with the argument, made by Hobby Lobby’s owners, that some types of emergency contraception may cause abortions. March for Life makes a similar contention about hormonal birth control. Doctors and medical researchers, however, almost uniformly disagree with these assertions.

Birth control primarily works by preventing ovulation, making it impossible for a woman to conceive. But the pill also causes thinning of the uterine lining. This makes it more difficult for a fertilized egg to implant in the womb. Mainstream medical organizations argue that pregnancy begins when a fertilized egg is implanted in the womb. But in the view of some abortion foes, including March for Life, preventing implantation is tantamount to an abortion. March for Life’s attorneys go so far as to call the lawsuit a legal challenge to the “abortion-pill mandate.” (In fact, the abortion pill, a drug that can be used to terminate a pregnancy in its early stages, is not included under Obamacare’s contraception mandate.)

Jeanne Monahan-Mancini, the president of March for Life Education and Defense Fund, declined to comment on the ongoing lawsuit or its implications for the message of the group’s annual march. “The March for Life Education and Defense Fund believes that life begins at conception/fertilization,” she wrote in an email. “The organization is opposed to any drug or device that has a mechanism of action that can be life-destructive.”

Joerg Dreweke, a policy researcher with the Guttmacher Institute, a pro-abortion-rights think tank, says the March for Life lawsuit is part of a pattern of anti-abortion groups conflating contraception with abortion in a quiet effort to roll back both.

“Birth control is very much in the movement’s cross-hairs, and antiabortion advocates are working to stigmatize contraception by blurring the lines between contraception and abortion,” he wrote in a recent analysis. “Yet, the movement is doing this in a strategic and deceptive way…Antiabortion groups ignore and often contradict their positions when it might hurt them politically.”

As evidence of this, Dreweke pointed to the fact that the March for Life, in promoting its upcoming events, wasn’t also touting the radical claims in its lawsuit: “If you take their lawsuit at face value, it turns the March for Life into the March to Ban Birth Control.”