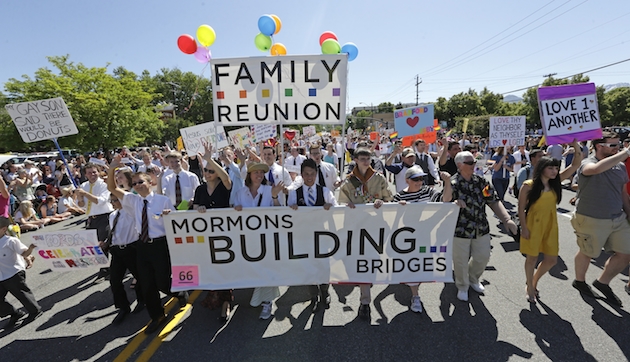 In a groundbreaking news conference on Tuesday, the Mormon Church officially announced its support for some LGBT rights, on the condition that the same legal protections are extended to all religious groups. But in doing so, the church also made clear their endorsement did not reverse the church’s opposition to same-sex marriage.

“We call on local, state, and the federal government to serve all of their people by passing legislation that protects vital religious freedoms for individuals, families, churches, and other faith groups while protecting the rights of our LGBT citizens in such areas as housing, employment, and public accommodation in hotels, restaurants, and transportation,” Elder Dallin Oaks, a top official of the church, said. “[These] protections are not available in many parts of the country.”

“We must all learn to live with others who do not share the same beliefs or values,” church officials stated.

“We must all learn to live with others who do not share the same beliefs or values.”

The announcement comes as an anti-discrimination bill makes its way through Utah’s state legislature that seeks to ban gender-based discrimination in the workplace and housing. In the past, the church has made overtures towards friendlier LGBT stances, but Tuesday’s press conference is by far its most clear endorsement of gay rights. Mother Jones‘ Stephanie Mencimer has covered the church’s evolution on same-sex marriage:

In the five years since the LDS church sent busloads of the faithful to California to canvass neighborhoods, and contributed more than $20 million via its members to support the initiative, it has all but dropped the rope in the public policy tug of war over marriage equality. The change stems from an even more remarkable if somewhat invisible transformation happening within the church, prompted by the ugly fight over Prop. 8 and the ensuing backlash from the flock.

Although the LDS’s prophet hasn’t described a holy revelation directing a revision in church doctrine on same-sex marriage or gay rights in general, the church has shown a rare capacity for introspection and humane cultural change unusual for a large conservative religious organization.

“I am proud that the LDS Church has seen fit to lead the way in non-discrimination,” state senator and founder of the Utah Pride Center Jim Dabakis said in a news release following the announcement. “As a religious institution, Mormons have had a long history of being the victims of discrimination and persecution. They understand more than most the value and strength of creating a civil society that judges people by the content of their character and their ability to do a job.”