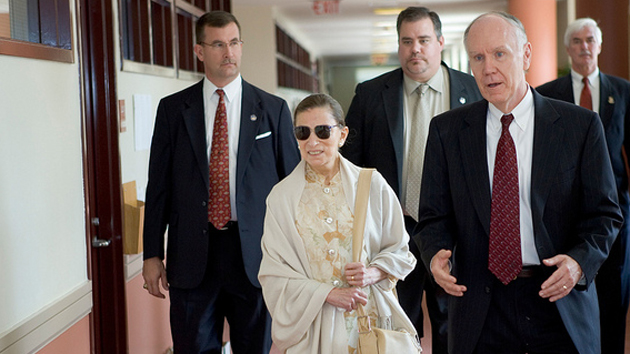 This story originally appeared at BillMoyers.com.

In an interview with the New Republic, 81-year-old Justice Ruth Bader Ginsburg said that the current Court’s worst ruling — and the one she would most like to overrule—was Citizens United.

That decision is the one responsible, in large part, for making this midterm election a record breaker in terms of outside spending. And that’s before the really heavy spending comes into play, in the weeks leading up to Election Day.

The 2010 Citizens United v. FEC decision struck down the limits on how much money corporations and unions can spend in federal elections. Ginsburg, who dissented in the case, explains here why Citizens United is top of her list and tackles the two runners-up.

I think the notion that we have all the democracy that money can buy strays so far from what our democracy is supposed to be. So that’s number one on my list. Number two would be the part of the health care decision that concerns the commerce clause. Since 1937, the Court has allowed Congress a very free hand in enacting social and economic legislation. I thought that the attempt of the Court to intrude on Congress’s domain in that area had stopped by the end of the 1930s. Of course health care involves commerce. Perhaps number three would be Shelby County, involving essentially the destruction of the Voting Rights Act. That act had a voluminous legislative history. The bill extending the Voting Rights Act was passed overwhelmingly by both houses, Republicans and Democrats, everyone was on board. The Court’s interference with that decision of the political branches seemed to me out of order. The Court should have respected the legislative judgment. Legislators know much more about elections than the Court does. And the same was true of Citizens United. I think members of the legislature, people who have to run for office, know the connection between money and influence on what laws get passed.

In her wide-ranging interview, she goes on to discuss her concerns for women’s reproductive rights, why she’s not going to step down, despite some calls from the left for her to do so, her scathing dissent on the Hobby Lobby ruling and life as “Notorious R.B.G.”

Read the full interview at The New Republic.