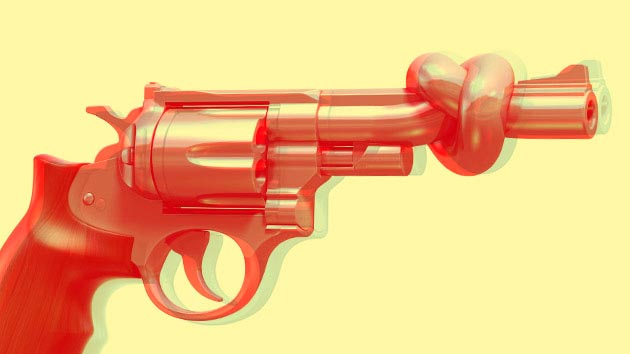 In the past month, towns across Pennsylvania have been scrambling to scrap their gun laws. Clairton, Allentown, and West Mifflin have rescinded rules banning guns in city parks or requiring gun owners to report lost or stolen weapons. Other localities, like Reading and College township, have announced plans to imminently repeal all laws regulating firearms.

Some of the city councilmembers and officials behind the repeals are doing so grudgingly. “It’s not something I ever intended to do,” one Munhall councilman told the Pittsburgh Tribune-Review after the town decided to undo a local gun law. Homestead’s mayor called the entire thing “absolutely ridiculous.” “We’re basically being forced to repeal these laws at gunpoint,” Doylestown’s council president wrote on his Facebook page. “Every local gun law must go!”

The statewide shakeup is the result of a law that morphed from a sleepy anti-theft bill into a blatant attempt to roll back gun control across the Keystone State. In January 2013, Pennsylvania lawmakers introduced House Bill 80, a bipartisan measure to create penalties for stealing scrap metals. It passed the state House handily and headed to the state Senate. But last October, the bill took a detour: With Republican Gov. Tom Corbett facing a tight reelection race, GOP lawmakers tacked a stalled four-year-old gun bill onto HB 80 in the final hours of the legislative session. The bill passed by a wide margin. A few days later, Corbett signed the bill before a room of gun lobbyists and activists at a sportsmen’s club. Nobody mentioned scrap metals. “By signing this, we are helping protect the rights of hunters and other sportsmen and sportswomen,” said Corbett.

The new law, known as Act 192, is one of the first of its kind. It rests on the legal concept of “preemption,” which limits localities’ authority to regulate firearms beyond what’s permitted by state law. Pennsylvania has long had a preemption statute on the books, as do 44 other states. But many towns and cities still have their own rules when it comes to guns. Harrisburg bans guns in parks; Pittsburgh prohibits discharging firearms within city limits. Under Act 192, it just became much easier for gun owners and gun activists to challenge these laws in court—and to pressure local officials to rescind the laws before being dragged into a costly legal battle.

Since Act 192 went into effect on January 5, dozens of Pennsylvania towns have pulled their gun laws. Under the new law, successful plaintiffs can sue to get their legal fees paid. But if a city or town prevails, it still has to bear its own costs. Joshua Prince, a firearms law attorney in Bechtelsville, says this one-sided fee structure is typical of civil rights statutes: “If you think of this as a civil rights issue, it isn’t uncommon whatsoever.”

Prince has sent letters to nearly 100 municipalities on behalf of four pro-gun group clients—American Gun Owners Alliance, Concerned Gun Owners of Pennsylvania, Pennsylvanians for Self Protection, and Firearms Owners Against Crime (FOAC)—notifying them that their gun laws could get them sued. By Prince’s count, at least 45 towns have already repealed their gun ordinances or promised to, for fear of costly legal challenges.

“We’re basically being forced to repeal these laws at gunpoint… Every local gun law must go!”

“I cannot put the city at risk of heavy financial loss with potential lawsuits,” Allentown Mayor Ed Pawlowski told the local paper, the Morning Call, after the city council voted to undo several gun laws, including one requiring gun owners to report lost or stole weapons. Clarion City manager Howard Bednar told the Pittsburgh Tribune-Review that he thinks a similar law that was just repealed was “common sense,” but that a lawsuit would be financially unsustainable.

Pro-gun groups have found this an effective weapon in rolling back local gun regulations before: Washington state’s Second Amendment Foundation has used the threat of preemption lawsuits to get small towns around the country to repeal their local gun laws rather than face the expensive possibility of litigation.

Before Act 192, Pennsylvania’s local gun laws were rarely found to be in violation of preemption. It was difficult for gun owners to show that their local laws had directly injured them, the previous standard for bringing a lawsuit. But under the new law, gun owners no longer have to meet this standard—they don’t even have to own a gun or live in the town. Act 192 removes the injury requirement, saying that any Pennsylvania resident who can legally own a firearm—and any gun group that counts such a person as a member—can sue a town to overturn local gun control laws that the plaintiff perceives as violating the Second Amendment.

That provision worries gun control proponents, who say the floodgates have been opened for hundreds of lawsuits. Four lawsuits have already been filed, three by the National Rifle Association, one by the Texas-based US Law Shield, a firearms legal-defense program. “It completely changes common law about how you get into court,” says Shira Goodman, an attorney and the executive director of CeaseFirePA, a gun violence prevention nonprofit. “Now somebody who lives in Philadelphia who is not a gun owner can sue Pittsburgh because they don’t like one of the gun ordinances that they have. And they can do that even if they’ve never been to Pittsburgh, have no intent to go to Pittsburgh. And they don’t even have to do it. They can get a gun group to do it for them.”

Pennsylvania’s new law was inspired by a similar law passed in Florida four years ago. In addition to making it easier for gun owners to challenge local ordinances, the preemption penalty bill introduced civil penalties for localities found to be in violation of the state’s preemption statute. (Originally, Florida’s bill proposed making preemption violations a third-degree felony; Under Pennsylvania’s Act 192, a preemption violation constitutes a first-degree misdemeanor, punishable by up to five years in prison.) The measure was backed by former NRA president and gun lobbyist Marion Hammer—one of the architects of Florida’s controversial Stand Your Ground law.

“Now somebody who lives in Philadelphia who is not a gun owner can sue Pittsburgh because they don’t like one of the gun ordinances that they have.”

Kim Stolfer, the president of Pennsylvania’s FOAC, takes credit for introducing the Florida law to Rep. Daryl Metcalfe, a Republican from Butler County, who sponsored the preemption bill that was eventually slipped into the scrap metal bill: “I brought that legislation here and I told Rep. Metcalfe that we needed to do something.” Using Florida’s bill as a template, Stolfer and a fellow gun activist wrote a draft bill. They added the provision removing the injury requirement, because “to challenge a civil right you shouldn’t have to have a criminal violation first,” says Stolfer.

Before Act 192, gun activists had mixed success with preemption lawsuits in Pennsylvania. In 2013, a gun owner successfully sued the town of Erie after he and seven others received citations while holding an open-carry rally. In 2010, the Pennsylvania Supreme Court tossed out several of Philadelphia’s gun ordinances following an NRA preemption lawsuit. But it allowed three other laws to stay on the books, ruling that the group lacked standing to sue over them.

“Our thought was, ‘We’ve got to get a specific grant of standing,'” says Jonathan Goldstein, an attorney representing the NRA in the three Pennsylvania lawsuits it has filed under Act 192. “Instead of having to go municipality by municipality, in order to solve this systemically, we had to get this grant of standing.”

Stolfer says that the push for the bill was fueled mostly by the grassroots efforts of gun rights groups like his. “I was up until 1, 2 a.m. trying to reconcile the bill with senators who were frustrated,” he recalls. The NRA, he says, helped lobby in the last year or so.

Pro-gun groups, including the NRA, have donated more than $34,000 to cosponsors of the bill in 2011 and 2012, after Metcalfe introduced Act 192’s first iteration. Metcalfe received almost $5,000 in donations during the same time frame, and Gov. Corbett received at least $14,000 in campaign donations from the NRA between 2004 and 2014, when he lost his reelection campaign. State Sen. Richard Alloway and Rep. Mark Keller, the legislators who helped moved the bill once it was part of HB 80, have each received more than $1,000 in NRA donations.

A number of Democratic state senators and local gun control groups have filed a joint lawsuit challenging Act 192. They allege that the law’s passage, including the tacking on of gun provisions to a scrap metal law, violates clauses of Pennsylvania’s constitution that require bills to address a single topic, and to be passed without changes to their original purpose. NRA attorney Goldstein thinks that premise will fail. “It’s nonsensical. The worst kind of sore loserism,” he says of the lawsuit. “The argument is not powerful.”

If state courts ultimately rule in the gun lobby’s favor, Goodman predicts that imitation laws in other states won’t be far behind. “With Stand Your Ground and other things they tried to get model legislation,” says Goodman. “If they succeed in getting this law upheld, my guess is this will be their next ploy across the nation.”