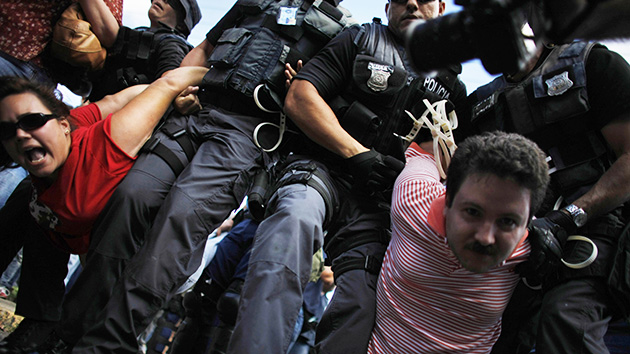 Two students are detained by Puerto Rico Police Department officers at a 2011 protest at the University of Puerto Rico in San Juan.Ricardo Arduengo/AP

On the evening of August 11, 2007, several members of the Punta Santiago Scooter Club volunteered to serve as escorts for a 15-year-old girl celebrating her quinceañera. The yellow-shirted club members’ parked scooters partially blocked traffic on Highway 3, a two-lane road outside the eastern Puerto Rican town of Humacao. Miguel Cáceres Cruz, a 43-year-old member of the club and a father of three, was helping to direct traffic when a police car tried to pass. According to witnesses and police, the cops exchanged rude words with Cáceres, after which three officers got out of the car.

In a shaky hand-held video, Cáceres can be seen backing away from the officers as they quickly approach him. He walks backward onto a sidewalk, where he backs into a wall. One of the officers, Javier Pagán Cruz, lunges toward Cáceres. The two tussle and Cáceres falls to the ground. The video briefly pans away, but when it comes back to the scene, Cáceres is beneath Pagán, holding on to the officer’s leg, possibly trying to keep him from pulling his gun out of the holster.

As the two men struggle, shouts from a large crowd of onlookers can be heard. Then a gunshot rings out, startling the person with the camera and the officer standing next to Pagán. Another shot is fired, followed by three more. Cáceres lies face down on the sidewalk, motionless. Pagán, leaning against the wall, fires one more shot, into the back of Cáceres’ head.

Following the shooting, Pagán limps back to the patrol car, having wounded himself in the leg with his first shot. He and the other officers leave the scene as Cáceres lies dying.

Cáceres’ death received virtually no attention outside of Puerto Rico. But even seven years later, it remains fresh in the minds of many Puerto Ricans who see it as a particularly egregious example of the kinds of police abuses that are endemic to the American commonwealth. As the recent deaths of unarmed African Americans at the hands of police have ignited a national protest movement in the continental United States, many Americans remain unaware that Puerto Ricans have been waging a similar campaign to rein in a police force that many perceive as out of control.

Advocates and activists in Puerto Rico have been quick to seize on the parallels between the two movements. “The murder of Miguel Cáceres is to Puerto Rico what the choke-hold death of Eric Garner is to New York and the Michael Brown killing is to Ferguson, Missouri,” civil rights attorney Judith Berkan wrote in a recent brief in an ongoing civil suit between the Cáceres family and the Puerto Rico Police Department. Olga Orraca, a Puerto Rican gay rights activist who has spoken out against police brutality, says events like Ferguson and the Garner decision could help lead to reforms on the island. “What’s happening with police in other parts of the US has a domino effect,” she says. “The situation that is happening with people, especially black people in the US, is having some impact on people living here.”

Between 2005 and 2010, more than 1,700 police officers were arrested for crimes including murder, assault, and drug trafficking. That’s roughly 10 percent of the force.

The Puerto Rico Police Department’s record of abuse and corruption has been extensively documented. A three-year Department of Justice investigation released in 2011 described the 17,000-member PRPD as “broken” and detailed its ongoing problems with excessive force and civil rights violations as well as its a failure to investigate sex crimes and domestic violence and its discriminatory policies targeting the island’s Dominican community. In June 2012, the American Civil Liberties Union released a report titled “Island of Impunity: Puerto Rico’s Outlaw Police Force,” which highlighted many of the same issues. Puerto Rico police at least 36 civilians between 2007 and 2011, according to the ACLU. The DOJ report cited Cáceres’ death “as a stark reminder of PRPD’s institutional dysfunction.”

Few police officers have faced consequences for alleged abuses. If not for the bystander’s video, the death of Miguel Cáceres Cruz likely would have gone unpunished. While a preliminary police investigation quickly cleared Pagán of any wrongdoing, the video’s appearance led to him being charged with murder just three days after the shooting. He was found guilty of first-degree murder and sentenced to 109 years in prison. A jury initially awarded the Cáceres family more than $11 million in a civil suit against the police, but a federal appeals court overturned the decision last year.

As residents of a United States commonwealth, most of the roughly 4 million Puerto Ricans are citizens, though they can’t vote in presidential elections and are represented by a non-voting member of Congress. The island has its own judicial system and its governor appoints the police superintendent, who oversees the island’s main police force, the PRPD. But Congress and the federal government have oversight over many aspects of the Puerto Rican legal system, including external judicial review of law enforcement issues.

Founded in 1898, shortly after the United States took possession of the island following the Spanish-American War, the PRPD has long represented the island’s conflicted relationship with the US government. Local activists have come to see it as a quasi-military organization that’s sacrificed the trust of ordinary Puerto Ricans by trying to undermine and violently crack down on the independence movement and other protest campaigns.

The feds have often stepped in to rein in the PRPD. Last year, the Federal Bureau of Investigation arrested 16 police officers on charges of robbery, extortion, drug trafficking, and taking bribes. The FBI special agent overseeing the bust compared the suspects to Denzel Washington’s dirty cop in Training Day. In 2010, the FBI secretly dispatched nearly 1,000 personnel to the island and snared more 60 police officers as part of an antidrug sweep dubbed Operation Guard Shack. The agency called it “the largest police corruption case in the FBI’s history.” In one sting, the FBI reported, “One of our undercover agents posing as a dealer selling multiple kilos of cocaine put the word out that he needed security during drug deals. Many of those who responded were cops.”

Between 2005 and 2010, more than 1,700 Puerto Rico police officers were arrested for crimes including murder, assault, theft, domestic violence, and drug trafficking. That’s roughly 10 percent of the 17,000-person force and nearly three times the number of New York City police officers arrested in a comparable five-year period. The NYPD is about twice the size of the PRPD. 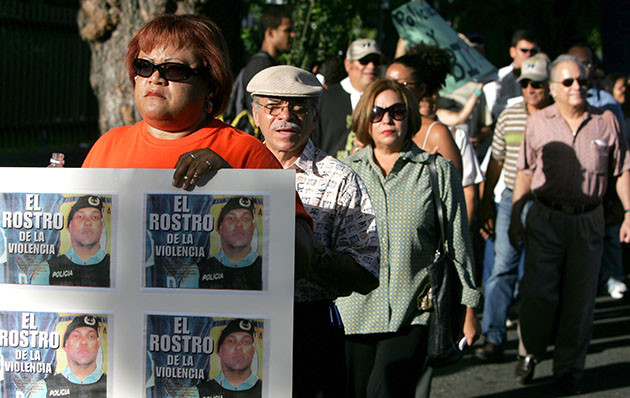 A woman carries a poster with Javier Pagán Cruz’s face that reads, “The Face of Violence,” a few days after he shot and killed Miguel Cáceres Cruz in 2007. Brennan Linsley/AP

As on the mainland, there is also a racial dimension to Puerto Rico’s policing problems. More than 100,000 Dominicans live on the island, which serves as a halfway point for immigrants hoping to get to the states. Reports of Dominicans being beaten, harassed, and killed by police helped spur the DOJ’s investigation. “We’ve denounced for more than 20 years the situation,” says José Rodríguez, a Dominican activist in San Juan and the head of the Dominican Committee for Human Rights.

As a result of the federal and ACLU investigations, in 2012 the DOJ and the PRPD entered into an agreement that set forth a number of reforms. (The consent decree, is similar to those that have been imposed on police departments in Los Angeles, Seattle, Oakland, and other cities.) Xiomora Colón-Rodríguez, the Puerto Rico Police Department’s general counsel on reform and civil rights compliance, says the department has agreed to meet more than 300 requirements under the agreement. The mandated reforms include keeping better track of reports of abuse. (At the time of the Cáceres shooting, Officer Pagán was the subject of seven civilian and internal complaints, five of them unresolved.) Other priorities include developing a new use-of-force policy, improving officer training, and preventing discrimination against Dominicans and other minority groups. The PRPD expects the changes to take a decade to implement.

The DOJ would not comment on the progress made so far. Its original technical compliance advisor resigned in February 2014, shortly after taking the job and “before his work was able to get underway,” according to a department spokesperson. The DOJ would not make the current compliance advisor, ret. Col. Arnaldo Claudio, available for an interview. In a report filed earlier this month, Claudio wrote that budget issues have hampered reform efforts, including raising officers pay, “a mood of cynicism among the police rank and file.”

“What’s happening with police in other parts of the US has a domino effect. The situation that is happening with people, especially black people in the US, is having some impact on people living here.”

Special Agent Moises Quiñones, a spokesman for the FBI’s San Juan Division, also won’t comment on the PRPD’s reform efforts. He does say that the FBI is busy on the island. “We do have many police corruption investigations going on,” he explains. He notes that the majority of police-related cases involve drugs and corruption, not civil rights.

Orraca, the gay rights activist, is part of a group of community representatives who have been working with the DOJ on the police reforms. Although she’s confident in the process, she has been frustrated by the lack of transparency from both DOJ officials and the police. It comes down to trust, and “I don’t think people trust the police.” Colón-Rodríguez recognizes this. “We know that earning the trust of the community will take time,” she says.

Rodríguez, who met with Attorney General Eric Holder when the consent agreement was announced in July 2013, says that the reform process has curbed some excesses and abuses. While not all Puerto Rico cops are bad, he explains, a few are standing in the way of change. “They don’t care,” he says.

He cites an incident earlier this month in a largely Dominican neighborhood in San Juan. Early on the morning of February 6, police officers entered the home of Rebecca Dones Escalera in search of her husband. The 43-year-old Dones recounts that they dragged her into the street, half-naked. The officers allowed her to go back inside and get dressed, but they kept their guns pointed at her and pushed her into a wall, even after she told them she’d had a hip replacement. The department confirms that Dones made a complaint alleging police misconduct after the incident. However, it maintains that the officers sought to arrest Dones’ husband; she claims they were searching for another man with the same name.

After finding that her husband was not at home, Dones recalls, the police left abruptly. As they were going, one pointed to Dones’ Santeria beads and shells and told her to “shove it up your ass.” “At the end of the day,” she says, “the police do whatever they want.”