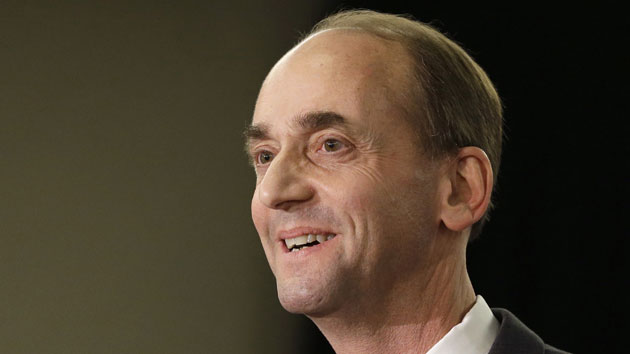 Update, 3/30/2015: Just over a month after the suicide of Tom Schweich, Spence Jackson, his media director and a longtime Republican official in Missouri, was found dead in his apartment. Initial reports point to suicide by a self-inflicted gunshot wound, the same way Schweich took his life.

On Thursday morning, Thomas Schweich, Missouri’s auditor and a Republican candidate for governor, died of an apparently self-inflicted gunshot wound. His death—coming moments after he had invited two reporters to his home later that day—shocked Missouri political observers, who point out that in addition to his beloved family and distinguished career in public service, Schweich, 54, had just won re-election to a second term as state auditor and was leading in early polls of the 2016 governor’s race. Why he would have taken his own life is a mystery to those who knew him. Just as strange is the predominant theory of what may have provoked his apparent suicide: rumors that he was Jewish.

In the days before his death, Schweich had been worried that the head of the Missouri Republican Party was conducting a “whisper campaign” against him by telling people that he was Jewish. Schweich was, in fact, an Episcopalian, but his grandfather was Jewish.

The police were called to Schweich’s home in Clayton, Missouri at 9:48 a.m. on Thursday. Just seven minutes earlier, Schweich had left a voicemail for Tony Messenger, an editor at the St. Louis Post-Dispatch, inviting him to send a reporter to his home that afternoon. That morning, Schweich had also invited an AP reporter to attend this interview.

According to Messenger, Schweich had hoped to counter rumors that he was Jewish, which he believed were being spread by Missouri GOP chairman John Hancock in a bid to damage his candidacy. He feared misconceptions about his faith might hurt him with evangelical voters, according to a report by the New York Times. Schweich had been “agitated” discussing rumors about his faith earlier in the week, according to the AP reporter who had spoken to him minutes before his death.

Hancock responded on Friday to allegations that he was spreading misinformation about Schweich’s faith: “It’s plausible that I would have told somebody that Tom was Jewish because I thought he was, but I wouldn’t have said it in a derogatory or demeaning fashion.”

But would rumors about Schweich’s religion really have hurt him politically? A Jewish background doesn’t appear to be impeding another prospective GOP gubernatorial candidate. Eric Greitens, a Jewish former Navy Seal, launched an exploratory committee for a statewide campaign in Missouri this week. The Washington Free Beacon described him as “the great Jewish hope” in a recent profile about his entry into politics. Reports note that he might enter into the gubernatorial race, though he yet to announce which office he has his eye on.

On Friday, Messenger, who had a close source relationship with Schweich, revealed that in the days leading up to Schweich’s apparent suicide, the Republican candidate had discussed a desire to go public with accusations against Hancock. He had told Messenger that “his grandfather taught him to never allow any anti­-Semitism go unpunished, no matter how slight.” Messenger noted that anti-Semitisim is a factor in Missouri, the state that “gave us Frazier Glenn Miller, the raging racist who killed three people at a Jewish community center in Kansas City.” And he wrote, “Division over race and creed is real in Missouri Republican politics, particularly in some rural areas. Schweich knew it. It’s why all week long his anger burned.”

Kevin Murphy, the Clayton police chief, told reporters that there is no evidence that Schweich was under political attack or suffering from mental illness. Murphy also said it did not appear that Schweich’s death was accidental. He noted that the ongoing investigation would include interviews with Schweich’s friends and family, which has yet make a statement to the media about Schweich’s death.

The Missouri legislature gathered on Friday to mourn Schweich, who, before becoming Missouri state auditor in 2010, had served as chief of staff to three different US Ambassadors to the United Nations, as well as working on anti-drug trafficking initiatives in Afghanistan under during the George W. Bush administration.

There remain more questions than answers about Schweich’s apparent suicide. “I have no idea why Schweich killed himself,” Messenger wrote in the Post-Dispatch on Friday. The only thing that seems clear is that there’s much more to the story behind his death.