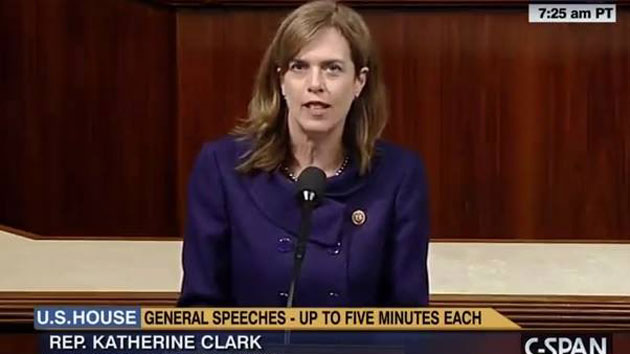 Congress’ next target: the often-vitriolic online movement known as Gamergate. On Tuesday Rep. Katherine Clark (D-Mass.), backed by the National Organization for Women and the Human Rights Campaign, asked her House colleagues to join her in demanding tighter enforcement of cyber-stalking and online harassment laws.

The Violence Against Women Act gives the federal government the authority to prosecute individuals who send violent threats over the internet, but actual convictions are hard to come by—the Department of Justice has prosecuted just 10 people for cyberstalking between 2010 and 2013. (In a long reported piece for Pacific Standard last year, the writer Amanda Hess detailed the near-impossibility of getting any level of law enforcement to investigate online threats.) “If we step up prosecuting these cases and enforce the federal laws that are already on the books, cyber-stalking—and the severity and quantity of threats that are made— we hope will be reduced,” Clark tells Mother Jones.

The Massachusetts Democrat, who replaced now-Sen. Ed Markey in a 2013 special election, began looking for ways to take on internet harassment after discovering last fall that Brianna Wu, a video game developer who has become a target of so-called “GamerGate” trolls, lived in her district. Wu has received more than three dozen death threats over the last five months—including one, posted to YouTube, in which a knife-wielding man bragged about getting in a car crash on the way to Wu’s house to kill her. Clark got in touch with Wu, and then with the FBI. (Wu had committed the grave sin of suggesting that tech could be a more hospitable place for women.)

In many cases, Clark found that social media networks and private sites were ambivalent about addressing the threats delivered via their platforms too. “When Brianna Wu had to pull out of a gaming conference called PAX East just last month*, the folks who were running the site for that said that a bomb threat did not violate their user policy,” Clark says. Her proposal wouldn’t have any effect on how private companies police their users, although she hopes companies—and trolls— will take harassment more seriously once law enforcement does. “What we’re hoping to do is change the culture around accepting these threats of death, of dismemberment, of great physical harm, as mere hoaxes, and really start to think of them in the violence they’re perpetrating and the economic harm that they’re doing,” she adds.

As Clark sees it, cracking down on harassment isn’t just about public safety and peace-of-mind—it’s about dollars and cents. “We are hearing from women that they are losing wages, they are losing opportunities, speaking engagements, they are incurring legal fees, and having to hire online protective services at their own cost,” she says. “Now that so much of our commerce is done online and a presence on social media is required for many professions, we really see this as an economic toll for women as well as a personal one.”

Right on cue, Clark herself became a magnet for abuse after publishing an op-ed on the subject on Wednesday. (Angry Twitter users told the congresswoman to drink bleach and expressed their desire to attack her, among other things.) But as a member of Congress, she knows she can get an audience with law enforcement if she ever feels truly threatened. “We’re really hoping that that is going to be available for anybody who is using the internet,” she says.

Clarification: Wu withdrew her company from the event, but attended in person.