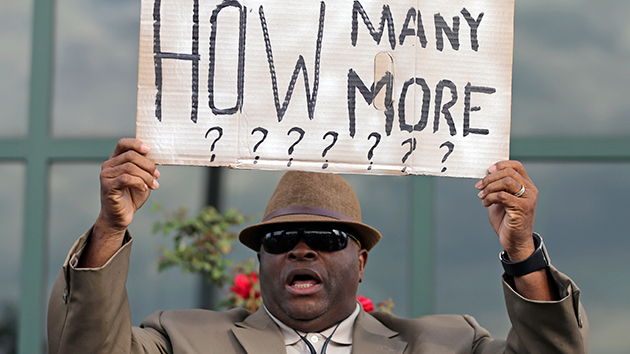 The Reverend Arthur Prioleau holds a sign during a protest in the shooting death of Walter Scott at city hall in North Charleston on Wednesday.Chuck Burton/AP

Michael Slager, the North Charleston police officer who on Tuesday was charged with the murder of 50-year-old Walter Scott, is one of at least three white officers in South Carolina over the past year to be charged in the shooting death of an unarmed black man. The South Carolina cases, all of which are ongoing, seem to stand in contrast to proceedings around recent high-profile killings by police in Ferguson, Missouri, New York City, and Cleveland, including the swift reaction by authorities in North Charleston to harrowing footage of Scott’s killing that surfaced Tuesday. “I have watched the video and I was sickened by what I saw,” police chief Eddie Driggers told reporters at a press conference on Wednesday, not long after the city’s mayor announced Slager’s firing.

But data shows that the response to Slager’s case is a rare exception. Between 2010 and 2014, according to Columbia, South Carolina’s the State newspaper, at least 209 suspects were shot at by police in South Carolina, including 79 people who died. In only three of the 209 cases were officers investigated for misuse of force, and none have been convicted. Among the suspects killed, 34 were black and 41 were white (in four cases the suspect’s race is unclear), and about half of all suspects shot were black, according to the data gathered by the State.

This mirrors what we know about the national landscape, although data on officer-involved shootings is far from comprehensive and broad patterns are difficult to discern. As Mother Jones has reported previously, officer-involved killings seldom lead to a charge, let alone a conviction. L. Chris Stewart, an attorney representing the Scott family, told the Los Angeles Times he believed that the video was the only reason Slager is facing charges.

The video from South Carolina, says a criminal-justice expert, “makes it almost impossible to claim that the victim was resisting arrest with violence.”

There are key differences between the eyewitness video from Scott’s case in North Charleston and the one that captured Eric Garner’s death in New York, says Delores Jones-Brown, a professor at John Jay College of Criminal Justice. The video of Scott’s shooting “makes it almost impossible to claim that the victim was resisting arrest with violence,” she says, or to suggest that the victim’s general state of physical health caused his death, as police did in Garner’s case. The video makes clear that Scott was running away when he was gunned down, she says. “So, where is the threat that would justify such a violent police response?”

Here are the two other recent cases in South Carolina:

In what appears to be a coincidence of timing, on Tuesday a grand jury in North Augusta charged police officer Justin Craven for the February 2014 shooting of Earnest Satterwhite Sr., a 68-year-old black man who’d driven away after Craven tried to stop him for a traffic violation. A prosecutor had sought to charge Craven with voluntary manslaughter, but the grand jury reduced the charge to a misdemeanor: firing a gun at an occupied vehicle. According to a report from the Associated Press, Satterwhite had been arrested and convicted multiple times for traffic violations, including DUIs, but he had no record of violence nor physical altercations with police on his criminal record.

In December 2014, a grand jury indicted former Eutawville police chief Richard Combs for murder in the May 2011 shooting death of 54-year-old Bernard Bailey. Combs had issued Bailey’s daughter a traffic ticket, and when Bailey went to the town hall to contest it, he and Combs got into a physical altercation. Combs shot Bailey twice in the chest. The US Justice Department cleared Combs of criminal wrongdoing in 2013, but last August, after Eutawville agreed to pay a $400,000 wrongful-death settlement to Bailey’s family, a local prosecutor brought the murder case to the grand jury.