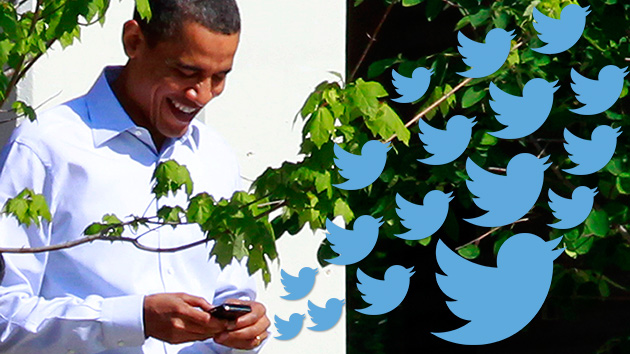 President Obama using his BlackBerry, in 2010Base photo: Charles Dharapak/AP

UPDATE: Tuesday May 19, 2015, 4pm EST: Mother Jones can reveal that the former owner of @POTUS is Steve D’Alimonte, 33, a freelance multimedia producer living in Toronto. In 2008, “I was super into the West Wing,” D’Alimonte said via phone from Canada. He joined Twitter at a time when “everything was available”, he said, but he ended up using it “more as a voyeur” than as an active user.

That was until 2011, when D’Alimonte realized he should use his real name on Twitter so potential employers could find him, so he switched handle to @stevedalimonte. D’Alimonte says that’s when he tried to to claim back his @POTUS account, which he had let lapse, but he wasn’t allowed to get it back. (Twitter reclaims dormant accounts). And then? “I didn’t think about it again until yesterday,” he said. D’Alimonte sent Mother Jones several emails confirming the identity of his Twitter account from 2008 and 2009. Twitter did not respond to emailed questions about the account.

And the “Roy” from D’Alimonte’s first tweet? That’s his “early adopter” friend Roy Abraham (known online as “Roy Marvelous“), a New Zealander and avid social media guru currently living in Vancouver, who recommended that D’Alimonte get on Twitter early.

A social-media frenzy greeted President Barack Obama’s announcement on Monday that he had “finally” joined Twitter with a verified @POTUS Twitter account. Of course, the president has long used the official @barackobama handle, run by his political group Organizing for Action (followers: 59.3 million), with the sign-off “-bo.” But what was new, we were told, is that this account will be pure Barack Obama—a personal account, all his own. The White House says the president “launched” the @POTUS account from the Oval Office:

By the end of Monday, that tweet had been shared and favorited hundreds of thousands of times, and generated hundreds of news articles welcoming the “Tweeter-in-Chief.” 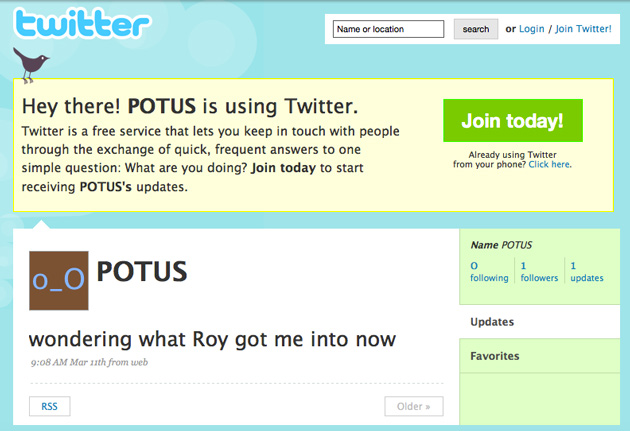 Who is Roy? What did he do to POTUS? Internet Archive

According to the tweet’s time stamp, it was sent on March 11, 2008. It reads: “wondering what Roy got me into now.” Twitter started in 2006. This tweet was sent while George W. Bush was still in office.

At the time, the @POTUS account only had one follower. The archive has not preserved who that solitary follower was, but @POTUS was soon to gather another three: By the end of January 2009, @POTUS was broadcasting to four followers.

But then, sometime between 2009 and September 2013, the account went silent, and was locked down to outside viewers. This message appeared in various languages across the archive’s 37 “captures” (as of Monday night). In English: “Only confirmed followers have access to @POTUS’s Tweets and complete profile.” Click the “Follow” button to send a follow request.” 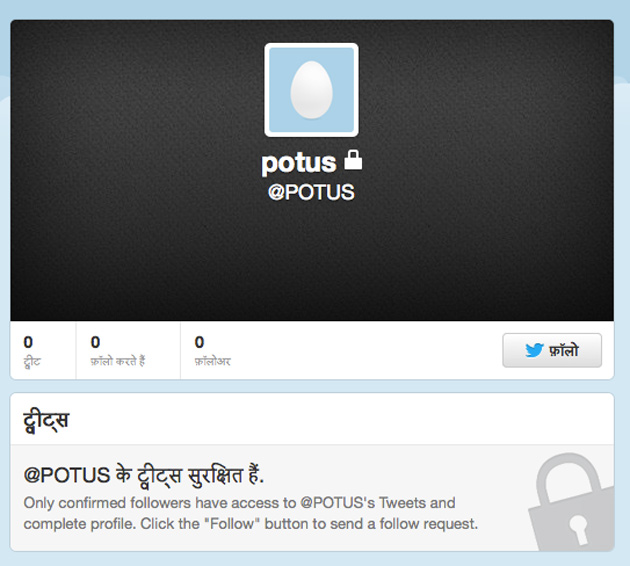 Who is Roy? And what mischief did he create for @POTUS? We may never know. But in the meantime, Mother Jones has reached out to the White House with a variety of questions, including:

We will update this post when we hear back.