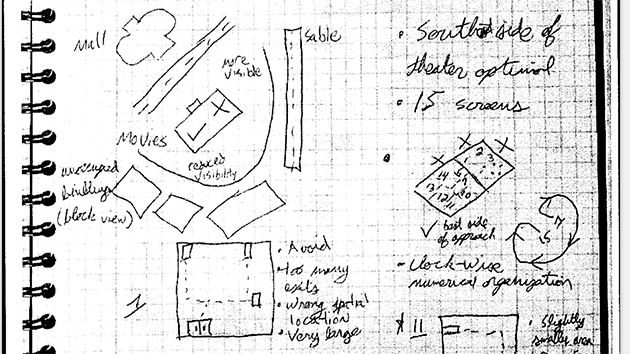 A page from James Holmes' diary.

It’s an argument we hear frequently from gun rights activists and conservative lawmakers: Mass shooters select places to attack where citizens are banned from carrying firearms—so-called “gun-free zones.” All the available data shows that this claim is just plain wrong. As I reported in an investigation into nearly 70 mass shootings in the United States over three decades, there has never been any known evidence of gun laws influencing a mass shooter’s strategic thinking. In fact, the vast majority of the perpetrators have indicated other specific motivations for striking their targets, such as employment grievances or their connection to a school.

Most recently, the marquee villain used to decry gun-free zones is James Holmes, who is currently on trial for the July 2012 massacre in Aurora, Colorado. “Out of all the movie theaters within 20 minutes of his apartment showing the new Batman movie that night, it was the only one where guns were banned,” Fox News pundit John Lott wrote not long after the attack. “So why would a mass shooter pick a place that bans guns? The answer should be obvious, though it apparently is not clear to the media—disarming law-abiding citizens leaves them as sitting ducks.”

Now, with the release this week of a detailed handwritten diary that Holmes kept before the attack, we know that there is no evidence to support Lott’s widely parroted claim. 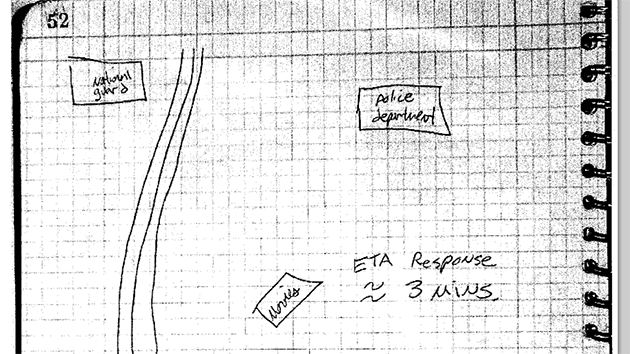 The diary includes five pages in which Holmes laid out his strategy for attacking the Cinemark theater complex. Under the header “Case the Place,” he drew maps and diagrams accompanied by many tactical notes regarding where victims would be located and how they would potentially react. “South side of theater optimal,” he wrote, noting its “15 screens.” He zeroed in on theaters 10 and 12 as the “best targets in complex” and marked the “best parking spot” for his car. Among his lists of “pros” and “cons,” he observed that theater 10 would have “many initial persons packed in single area.” He assessed the many doors and hallways through which people would try to escape.

Nowhere in any of this extensive planning did Holmes make reference to gun regulations at the theater or the potential for moviegoers to be armed. Moreover, he had every expectation that he would not get away with his crime. In one sketch, he drew two other locations not far from the theater: the Aurora Police Department and a Colorado National Guard facility. “ETA response [approximately] 3 mins,” he noted. In his list of possible methods of attack, where he checked off mass murder using firearms as his choice, he also wrote “being caught 99% certain.”

Additional evidence from the trial underscores that Holmes clearly was not planning to avoid getting shot, killed, or apprehended. On an AdultFriendFinder.com profile he filled out shortly before the shooting, he wrote: “Will you visit me in prison?”

Here are the five diary pages filled with Holmes’ plans, followed by the full document: