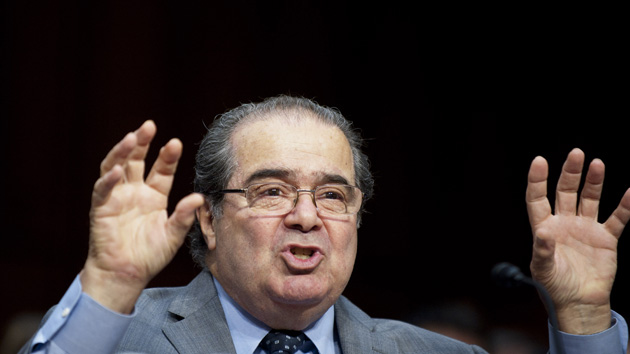 The Supreme Court’s Monday ruling in favor of a controversial lethal injection drug gave the court’s dissenting liberal justices an opportunity to argue against the constitutionality of the death penalty in general. That led conservative Scold-In-Chief Antonin Scalia, to reach deep into the history books—from Shakespeare to the Enlightenment to the French Revolution—to attack one of the dissenters, Stephen Breyer, for his opposition to capital punishment.

“Welcome to Groundhog Day,” Scalia writes at the start of his concurrence to the ruling upholding Oklahoma’s use of a sedative that’s been responsible for multiple botched executions. In a “familiar” response, Scalia says, death penalty abolitionists like Breyer latch onto suspicious new studies “as though they have discovered the lost folios of Shakespeare [and] insist that now, at long last, the death penalty must be abolished for good.”

Scalia sounds particularly perturbed by Breyer’s citation of the long delays before execution as a reason to ditch the death penalty, as Scalia accuses the liberals on the court of being the cause of those delays. Breyer’s “invocation of the resultant delay as grounds for abolishing the death penalty,” Scalia writes, “calls to mind the man sentenced to death for killing his parents, who pleads for mercy on the ground that he is an orphan.”

Scalia writes that Breyer “rejects the Enlightenment.” His disdain for the abolitionist call from Breyer and Justice Ruth Bader Ginsburg reaches its most fevered pitch midway through the concurrence. Channeling almost Occupy Wall Street-style language bashing the out-of-touch 1 percent, Scalia says the court’s wealthy justices can’t comprehend the fear that pervades Real America. “[W]e federal judges live in a world apart from the vast majority of Americans. After work, we retire to homes in placid suburbia or to high-rise co-ops with guards at the door,” he writes. “We are not confronted with the threat of violence that is ever present in many Americans’ everyday lives. The suggestion that the incremental deterrent effect of capital punishment does not seem ‘significant’ reflects, it seems to me, a let-them-eat cake obliviousness to the needs of others. Let the People decide how much incremental deterrence is appropriate.”