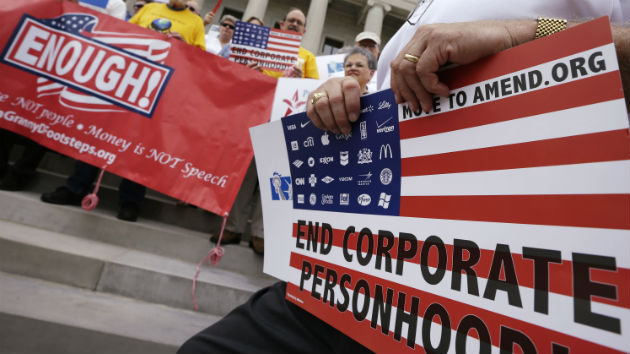 The Federal Election Commission hit a bizarre new low on Thursday when its three Republican commissioners declared during a contentious meeting that two of their Democratic colleagues aren’t, legally speaking, people when it comes to petitioning their own agency.

Confused? Let me explain: Last week, FEC chair Ann Ravel and commissioner Ellen Weintraub, both Democrats, took the unusual step of filing a petition to their own commission, complaining that the agency is not doing its job of enforcing campaign finance law. The petition asked the commission to consider making new rules on several key issues, including the regulation of foreign money and the coordination between super-PACs and campaigns, arguing that currently the FEC is shirking its duty by not addressing these concerns. Weintraub said at the time that she didn’t have high hopes for substantive change but thought filing a petition highlighting the issue of deadlock might at least force a public discussion of the problem.

At Thursday’s meeting, the approval of four of the agency’s six commissioners was needed to move the petition to the next step in the process, opening it up for public comment.

Ordinarily, this is a pro forma vote, but instead the three Republican commissioners objected to the petition on the grounds that Ravel and Weintraub, as commissioners, don’t have legal standing as “interested persons.” The petition procedure is meant for citizens and members of the public, they said.

“I cannot believe that you are actually going to take the position that I am not a person,” Weintraub responded. “A corporation is a person, but I’m not a person?”

Facing off with GOP vice chairman Matthew Petersen, Weintraub asked, “You want to insist that I am not a person?”

“That’s how bad it has gotten,” Weintraub scoffed. “My colleagues will not admit that I am a person. That’s really striking.”

Citing concerns about legal procedure, the commission put a vote on hold on whether to allow the commissioners’ petition to move forward to the next step in the process.