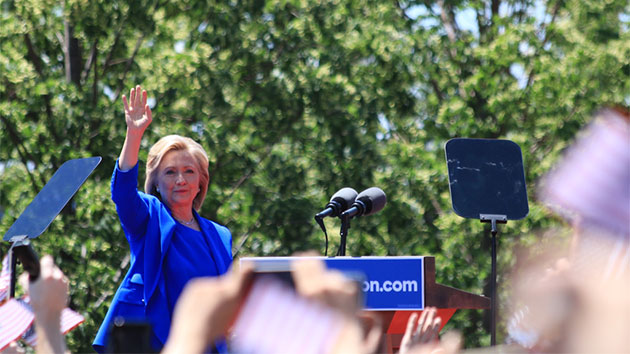 There was the first, inevitable video announcement. Then, the media-phobic “Scooby” van tour through early primary states. Now, speaking today in front of a bright New York skyline, on an island in the middle of one of the most polluted waterways in America, Clinton officially launched her campaign for presidency.

“You brought our country back, now it’s time, your time, to secure the gains and move ahead—and you know what? America can’t succeed unless you succeed. That is why I am running for president of the United States.”

The speech on Roosevelt Island, opposite the UN building, would have been difficult to give in the heat; once the clouds cleared, the stage would have certainly felt hotter than 81 degrees—maybe that’s one reason the crowd appeared at times somewhat muted. The luckiest supporters crowded under the European Littleleaf Linden trees along the waterfront, which park staff assured us were low allergenic. Nonetheless, the biggest applause lines came when Clinton spoke about marriage equality and women’s rights. While the “overflow” area—where a large screen had been set up seemingly in the hopes of bigger crowds—remained nearly empty, the live TV footage would have looked pretty great: billowing American flags, and soaring in the distance, One World Trade, once known as the Freedom Tower. 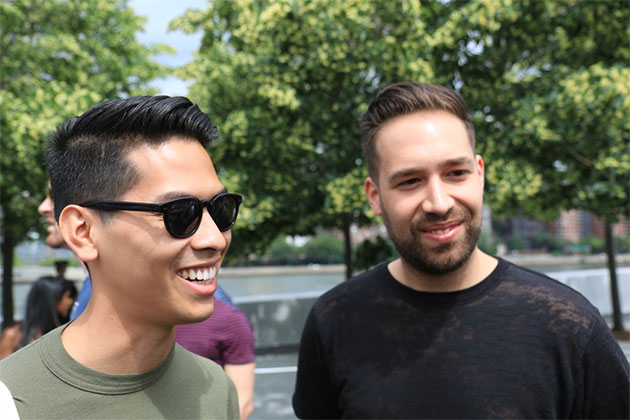 The diversity of the supporters here today represents the Obama coalition that Clinton surely hopes to recapture. Valerie Wakin, 29, from Brooklyn, liked that Clinton was focusing on pay equality as a campaign issue, and also felt that Clinton had broad appeal: “I don’t think she just supports African American rights, she supports everyone,” she said. Ahmad Nelson, 28, from Pittsburgh admitted that while “she does have some baggage” from a long life in the public eye, he will vote for Clinton to help raise the minimum wage across the country. 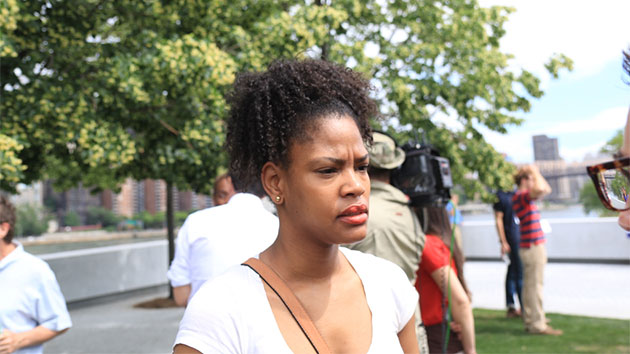 Noticeable in the crowd was a large cohort wearing the rainbow flag version of Hillary’s much-derided logo. Danny Jestakom, 26 and Philip Fry, 24, who have been a couple for about a year, said Clinton’s embrace marriage equality appealed to them, as did her attempts to let voters learn more about her personal story—evident in today’s speech, which drew heavily on her biography. “She seems like a real woman, a real person,” Fry said.