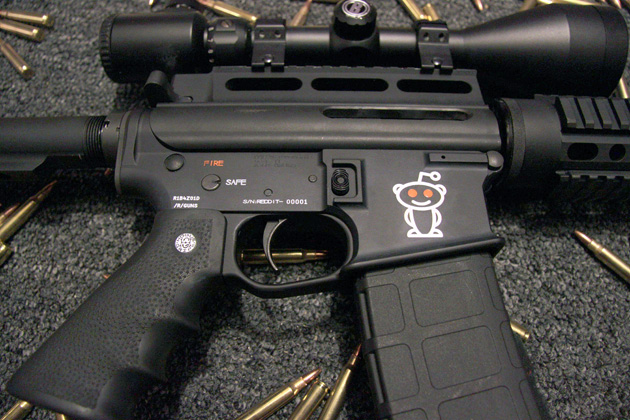 Custom AR-15s were produced for Redditors with the company's permission.via Reddit

As turmoil continues at Reddit, former CEO Yishan Wong has been defending ousted leader Ellen Pao, in part with a schadenfreude-tinged post on Tuesday in which he informed the trolls populating the site’s controversial hate-speech forums that their days are likely numbered. But when I questioned Wong on Tuesday night on Twitter about another controversial corner of Reddit—a de facto national market for assault weapons called r/GunsForSale that we exposed in a Mother Jones investigation last year—he was of a different mindset. As Wong had put it earlier on Tuesday, the new CEO now had “the moral authority to move ahead with the purge” of Reddit’s darkest reaches. I wondered whether that might now also apply to a forum where anonymous gun dealers revel in the prospect of profiting from the mass murder of first graders and boast about selling firearms with zero regulatory scrutiny.

Reddit wasn’t just allowing this gun market to thrive on its platform when we broke the story, it had also put its stamp on it—literally. The company had licensed its official alien logo for use on a bunch of custom AR-15 semiautomatic rifles, produced for and purchased by the site’s users. Turns out Wong, who was CEO at the time, was himself a fan. In his response to me on Tuesday night he wrote in a series of tweets:

Ironically the sensationalist, leading questions you sent us when “researching” this muckraking piece sparked my interest in guns, which later led me to buy an AR-15. Wish I could get one of those reddit-stamped lower receivers though. Seriously, the hi-res pictures you included made those rifles look amazing. It was almost an advertisement for them.

A fresh look at r/GunsForSale this week revealed plenty of Bushmaster AR-15s and Glocks with high-capacity magazines—the weapons of choice for mass shooters in Charleston, Newtown, Aurora, Tucson, and so many other places—continue to be available from unidentifiable sellers eager to do deals in person. As in: Meet me in the parking lot, show me the money, no questions asked. 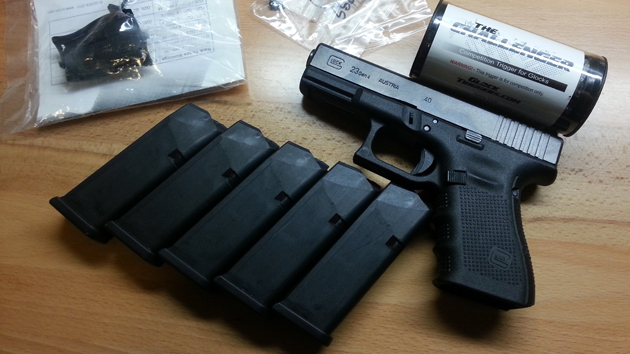 “I’d prefer to sell this face to face. I am in North Florida.” From a July 14 gun listing on Reddit

There is now hot debate about a regulatory process that let the Charleston killer purchase his Glock after three days from a gun store, despite his disqualifying criminal record. But forget about how licensed retailers should operate: With sites like r/GunsForSale brimming with product, including in South Carolina, that whole conversation may really just be moot.