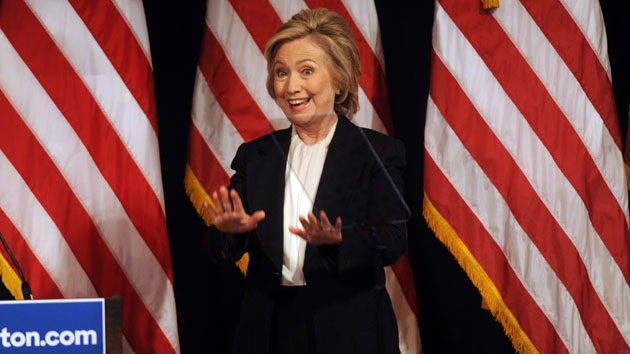 Hillary Clinton threw her support behind efforts to boost the minimum wage for fast food restaurant workers on Friday. “The national minimum wage is a floor, and it needs to be raised,” Clinton said during a wide-ranging speech on Friday that centered on various problems with New York’s corporate culture.

But there’s one pretty big hitch to Clinton’s endorsement: it only applies to folks who work in New York. The idea Clinton is backing comes from a panel appointed by New York Gov. Andrew Cuomo. Earlier this week, that panel recommended slowly raising the minimum wage for fast food workers so that it eventually reaches $15 per hour by July 2021 (with the rate increasing at a faster clip for people who work within New York City, where the cost of living is higher, so that employers would be required to pay workers there that $15 rate by 2018).

While Clinton may support a higher wage for workers in New York, she’s resisted liberals’ calls to raise the national minimum wage to $15 per hour. “I think part of the reason that the Congress and very strong Democratic supporters of increasing the minimum wage are trying to debate and determine what’s the national floor is because there are different economic environments,” Clinton said in New Hampshire last week. “And what you can do in L.A. or in New York may not work in other places.”

Clinton’s rivals for the Democratic nomination have used the minimum wage to attack Clinton’s liberal bona fides. Shortly after Clinton made those comments last week, former Maryland Gov. Martin O’Malley released a statement trumpeting his own support for lifting the minimum wage to $15 across the country. “Some people will say this is hard to do,” O’Malley’s statement said. “And it will be. But leadership is about forging public consensus —not following it. On this issue, we must lead with our progressive values to rebuild the American Dream.”

Sen. Bernie Sanders is also a loud proponent of lifting the minimum wage for all workers across the country. Sanders introduced a bill in the Senate this week to raise the federal minimum wage from $7.25 per hour to $15. “I think if you work 40 hours a week, you have a right not to live in poverty,” Sanders said outside the US Capitol at a rally introducing the bill. “The current federal minimum wage is a starvation wage. It’s got to be raised to a living wage.”