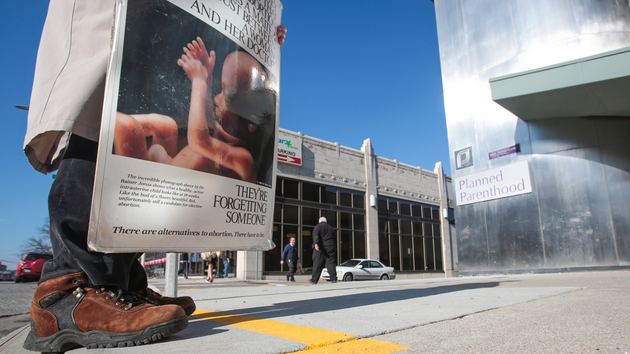 A protester stands outside of a Planned Parenthood clinic in Boston.Nicolaus Czarnecki/ZUMA

In the last week, a little-known anti-abortion activist named David Daleidin ignited a firestorm by releasing two selectively edited videos in which Planned Parenthood officials appear to be negotiating the sale of aborted fetuses. That Planned Parenthood is the target of a withering attack by anti-abortion activists is no surprise—they have been at war for years. But this time seems different, with some of Planned Parenthood’s strongest allies drawing nervous comparisons to the 2009 sting operation that destroyed the community organizing group the Association of Community Organizations for Reform Now (ACORN).

They may be right to worry.

Daleidin and major anti-abortion groups say that the footage definitively shows two of Planned Parenthood’s top medical personnel haggling over the price of fetal body parts—their sale is illegal—and admitting to altering the abortion procedure in order to better preserve fetal specimens. Planned Parenthood and its supporters say the edited videos are misleading and that Dr. Deborah Nucatola, Planned Parenthood’s senior director of medical services who appears in the first video, was only discussing the costs of storing and transporting fetal remains. The group can legally recoup those costs under federal law. And any changes to the abortion procedure, they note, creates no additional risk for the woman.

But the political conversation has quickly outpaced the facts. The videos have already moved Congress to launch two probes into the organization’s activities. Eight Republican governors—including several who are running for president—have opened parallel investigations. Many Republican senators—including several who are running for president—have vowed to strip Planned Parenthood of its hundreds of millions of dollars in federal funding. Daleidin, meanwhile, who is releasing the videos through a newly formed anti-abortion group called the Center for Medical Progress, has promised to release more explosive hidden-camera footage.

Planned Parenthood, a 73-year-old organization, has survived annihilation campaigns before. In recent years, it successfully beat back various attempts to cut its federal funding by framing these attacks as part of a “war on women.” While its opponents tried to brand Planned Parenthood as an abortion mill, the group has stressed that abortions make up only 3 percent of its services, and STI screenings, Pap tests, and pregnancy prevention comprise the vast majority of its activities. The group, which now receives $528 million in federal funding (or 41 percent of its annual budget), also provides contraception to almost 40 percent of women who rely on public programs for family planning. And at least at the federal level, Planned Parenthood has kept its funding intact.

But with these new videos, progressive members of Congress and Planned Parenthood’s biggest corporate backer are nervously recalling another liberal institution brought down by a conservative sting operation: ACORN, a grassroots political group that fell apart in 2010 after conservative activist James O’Keefe pulled a similar sting. “We saw what happened with ACORN, and it happened so fast and it happened without enough pushback from Democrats,” Heidi Hess, the campaign director for Credo, a liberal group that is Planned Parenthood’s largest corporate sponsor, told the Hill. Sen. Barbara Boxer (D-Calif.) agreed: “It does have that feeling.”

They are referring to the successful GOP campaign to destroy ACORN, a string of community organizations that advocated for various issues touching low-income families. But the group was best known for its massive voter registration drives. ACORN registered 450,000 first-time voters in 2008 alone. Over its nearly 40 years of operation, the group had received about $53 million in federal funds for its community organizing activities.

Republicans frequently accused the group of committing voter fraud—especially in connection with the 2008 election, when Republicans suggested that ACORN’s work in was instrumental in Obama’s victory. But they failed to turn up evidence of widespread wrongdoing. Then, in September 2009, conservative activist James O’Keefe released a video in which he posed as a pimp seeking advice from an ACORN employee on hiding his illegal activities and his income. In the video, the ACORN employee appeared to help him. Democrats distanced themselves. Congress clamored to pass a law, which President Obama signed, preventing ACORN from obtaining any new government contracts. ACORN went bankrupt and, under a cloud of mismanagement, it dissolved. Several months after ACORN imploded, the Government Accountability Office and attorneys general in New York and California all cleared ACORN of any wrongdoing.

To understand the parallel, it helps to consider how events unfolded the last time anti-abortion activists tried to bring down Planned Parenthood with an undercover video—and why this time may be worse. In 2011, Lila Rose, the founder of anti-abortion group Live Action, recruited actors to pose as a sex trafficker and underage sex worker and ask Planned Parenthood how to obtain abortions for teens as young as 14. Rose then released two selectively edited videos implying that Planned Parenthood staffers were willing to cover up child trafficking. (Planned Parenthood fired one employee who appeared in the videos, but not the other.) Planned Parenthood reported the incident to the FBI before the sting became public. Nevertheless, Rep. Cliff Stearns (R-Fla.) launched a wide-ranging investigation into the group’s use of the $350 million it received annually, at the time, from the federal government.

Now comes the part of this story you probably remember: Citing the congressional investigation, in December 2011, the breast cancer prevention group Susan G. Komen for the Cure pulled $680,000 in grants meant to help Planned Parenthood provide breast cancer screenings and education programs. The move unleashed an avalanche of public criticism. Young women in particular launched a furious social-media campaign against Komen: #PPSavedMe went viral. New mothers, uninsured students, and unemployed graduates used the hashtag to publicize how they relied on the giant nonprofit for affordable care in leaner times or during moments of personal health crises.

Komen restored the grants within days. In the aftermath, Karen Handel, a longtime Planned Parenthood opponent and a senior Komen official, emerged as the figure who led the campaign to sever the grants. Her efforts wound up placing the focus on Planned Parenthood’s role in providing affordable women’s health care in partnership with other nonprofits, which former patients and Planned Parenthood itself were all too happy to amplify. In Congress, Rep. Stearns’ investigation of Planned Parenthood came to embody the war on women, and it fizzled out.

Several states have cut funds to Planned Parenthood as conservatives took control of legislatures. But in Congress, as long as Planned Parenthood’s status as the nation’s largest abortion provider was secondary to its reputation as a critical women’s health care provider, attacks on the group have been politically risky for a GOP that fears for its status among female voters.

These new sting videos, however, pose a different kind of crisis for Planned Parenthood. The last time the organization became the center of national debate, its reputation as a low-cost provider for mostly low-income women was a critical piece of that conversation. The latest sting videos, by contrast, make Planned Parenthood seem like a sinister outfit that profits wildly from abortion—the Planned Parenthood of pro-lifers’ nightmares. It helps that conservative news organizations including Fox News and Breitbart are treating each new video as if it were a piece of undercover journalism, and not the product of an elaborate and well-funded advocacy campaign by anti-abortion activists to eradicate Planned Parenthood. In order to infiltrate the group, Daleiden spent a year credentialing a fake medical research company and obtaining tax-exempt status under the IRS’s bioengineering category for his anti-abortion group. He told the New York Times he has been friends with Lila Rose, a mentee of James O’Keefe, “for many, many years.”

The recent videos have refocused the public on Planned Parenthood’s role as an abortion provider. Crucially, there are moments in the videos when Nucatola and Mary Gatter, the medical director of Planned Parenthood, describe in frank detail the use of fetal organs and body parts. These portions of the video invoke images of “late-term” abortion—a political, not medical term that anti-abortion activists use as a catch-all phrase to describe abortions that take place after fetuses start to “look like babies.” Nothing is more controversial in American abortion politics. A majority of voters consistently support a right to abortion early in a woman’s pregnancy, but when the question comes to second- and third-trimester procedures, those same voters become increasingly hostile to abortion rights.

Planned Parenthood’s allies have sensed that these videos have more resonance than past attacks. Compared with past attacks on the group, its supporters have been more muted. During the Komen debacle, presidential hopeful Sen. Bernie Sanders (D-Vt.) was part of a chorus of lawmakers who demanded that Komen restore funding. This time around, he has not gone out of his way to defend the group, and he said the “tone” of the staffer in the first video “was terribly wrong.” Sen. Harry Reid (D-Nev.) is responding to reporters’ questions exclusively by reading from a tepid, prepared statement: “These politically motivated videos raise questions, but nothing I’ve seen indicates that Planned Parenthood violated federal law.” On Tuesday, Credo called on Democrats to defend Planned Parenthood more vocally.

Republican leaders in both houses of Congress, meanwhile, are once again contemplating measures to strip the group’s federal funding, even at the risk of shutting down the government. Just two years ago, Republicans came under heavy fire for delaying the end of the 2013 government shutdown over an anti-birth-control measure. But with the wind apparently at their backs, they seem willing to attempt a similar gambit again. On Wednesday, Republicans tried attaching an anti-abortion amendment to a Veterans Affairs bill. (The sponsor, Patty Murray (D-Wash.) pulled the bill.) Presidential candidates Sens. Rand Paul (R-Ky.) and Ted Cruz (R-Texas) are among those who have promised to defund Planned Parenthood. GOP Govs. Scott Walker of Wisconsin and Bobby Jindal of Louisiana, also running for president, have launched state investigations into Planned Parenthood.

A congressional push to defund Planned Parenthood would likely not result in the organization’s complete collapse, and would probably only focus on the group’s Title X funding, a federal family planning grant program that makes up 10 percent of the group’s federal support. The rest of its federal funding comes from Medicaid; in the past, as Vox reports, conservatives have left that alone. But Planned Parenthood allies are already fearful that this is the start of a full-on ACORNing. Earlier this week, Rep. Diane Black (R-Tenn.) said that the videos “give us a window into the soul of the big abortion industry.” If the public comes to believe her, it could spell disaster for the largest women’s health care network in the country.