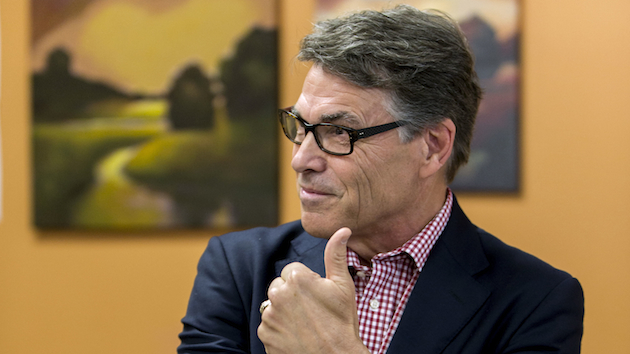 Rick Perry’s fundraising for his second presidential campaign is off to a tepid start. Last week, his campaign announced a $1.07 million haul since Perry officially declared his candidacy at the beginning of June. Though he entered the race later than some of the other GOP candidates, that’s far lower than the amounts raised by some of his rivals including Jeb Bush, Ted Cruz, and Ben Carson.

Things were a bit better for Perry on the super PAC front, where a trio of interlocking groups supporting his campaign claimed $16.8 million in donations, according to CNN. The largest donor to this outside spending effort is the billionaire owner of a Texas pipeline company that also happens to write Rick Perry’s paycheck.

As Mother Jones reported last month, Perry is still sitting on the corporate board of Energy Transfer Partners, even after making his presidential campaign official. Perry had joined the board of the oil and natural gas pipeline company in early February, shortly after leaving the Texas governor’s office. Politicians typically step down from such jobs before launching a presidential bid to avoid any appearance of a conflict of interest, but Perry’s kept his board spot while hitting the campaign trail. While the company isn’t willing to disclose his salary for the board spot, past Securities and Exchange Commission records show that the job has recently come with about $50,000 in compensation.

But Energy Transfer Partners’ CEO Kelcy Warren is putting far more money into Perry’s presidential ambitions. According to CNN, Warren accounts for $6 million of Perry’s super PAC donations to date. Warren—worth $6.7 billion according to Forbes—chipped in just $250,000 to the pro-Perry super PAC in 2012, but he is clearly more invested in Perry’s second campaign. In addition to ponying up the most money for the super PAC’s, Warren is working for the official campaign as its finance chairman.