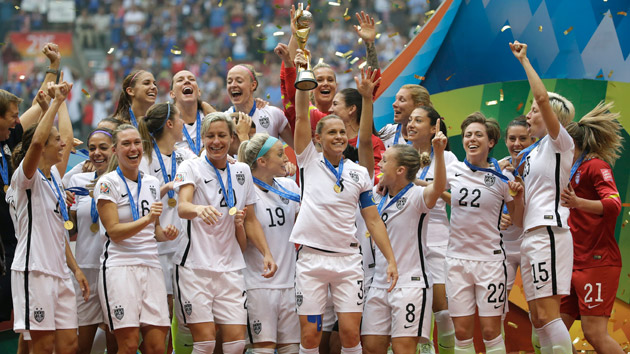 When the US women’s national team routed Japan in the World Cup finals Sunday, more than 20 million viewers tuned in, making it the most-watched soccer match ever in the United States. To put that in perspective, more Americans watched Sunday’s matchup than last year’s men’s World Cup championship (roughly 17 million viewers) or all but Game 6 of this year’s NBA Finals.

Still, the amount of money earned by the entire women’s field compared to what the men made in Brazil is striking. As Mary Pilon points out in Politico:

And that disparity trickles down to the women’s champ: The USWNT will earn $2 million from the victory, nearly 18 times less than the German men’s team received after winning the 2014 World Cup ($35 million). Even the US men’s team, which was bounced in the round of 16 that year, earned $8 million.

As BuzzFeed‘s Lindsey Adler writes, “When the disparity in pay for women athletes versus men is raised, the argument often veers toward television ratings, with claims that women’s sports are watched by significantly fewer people.” Although that argument may not hold up for American audiences, it’s worth noting that early viewership figures for this year’s World Cup suggest that women’s matches, though steadily attracting a global audience, are still far below that of the men’s World Cup (188 million on average).

FIFA generated much of its revenue between 2011 and 2014 from TV and marketing rights from the 2014 World Cup, and it remains to be seen how much money in commercial revenue the women’s games will produce. (The men’s World Cup brought in $4 billion.) So while the most recent ratings suggest that the popularity of the Women’s World Cup at home and abroad is heading in a positive direction, it will take far more to close the money gap.