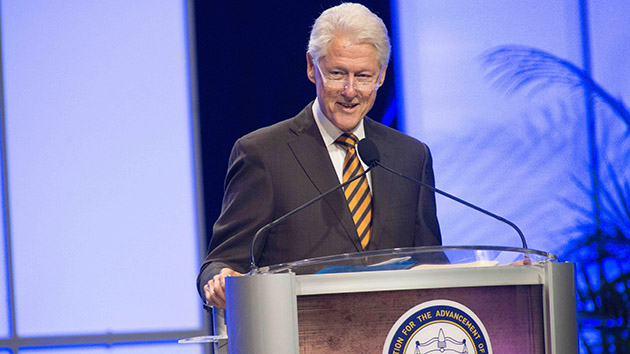 As Americans eagerly await the circus that will be tomorrow’s first Republican presidential debate—excitement almost entirely generated by the presence of front-runner Donald Trump—a new report offers a surprising connection that led the real estate mogul to throw his hat in the ring: Bill Clinton.

The Washington Post reports Clinton and Trump had a private phone call shortly before the GOP’s newest star officially announced his candidacy. During the call, the former president—and spouse of the likely Democratic nominee—stopped short of outright pushing him to run for president. Instead, Clinton reportedly prodded Trump to seek a “larger role in the Republican Party and offered his own views of the political landscape.”

Clearly flattered by the words of his favorite president ever, Trump got the hint, entered the race. The rest is viral history. Clinton’s office confirmed the phone call.

Despite the recent exchange over Trump’s controversial “rapist” characterization of Mexican immigrants—Hillary said she was “very disappointed” by the comments; Trump fired back, calling her the “worst Secretary of State” in history—the new report highlights the unusual friendship shared between the Clintons and Trump.

Back in 2012, Clinton noted that Trump has been “uncommonly nice” to him and Hillary. “We’re all New Yorkers,” Clinton said. “I like him. And I love playing golf with him.”

With that kind of praise, Clinton has clearly been playing the long game.