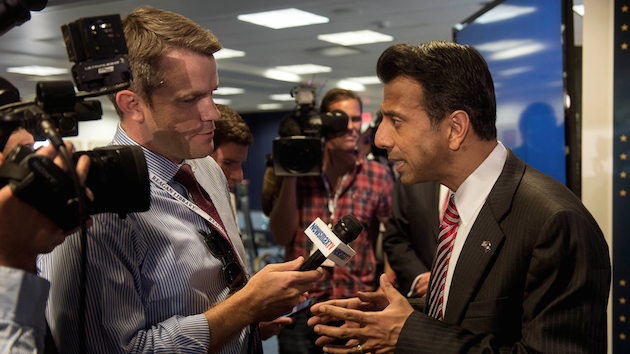 The statement is untrue, as state after state investigating the explosive but doctored sting videos accusing Planned Parenthood of selling fetal organs has been forced to concede. (Such sales would violate federal law.)

But Jindal, who appeared in the earlier GOP debate for second-tier candidates, has staked a lot on his campaign to bring Planned Parenthood’s affiliate in Louisiana to its knees. Under his direction, Louisiana is investigating whether Planned Parenthood of the Gulf Coast trafficked in fetal parts—even though the group’s two Louisiana clinics do not even perform abortions.

In federal court, Jindal’s administration is battling for permission to terminate $730,000 in Medicaid payments to the group, which Planned Parenthood argues is arbitrary and illegal. Louisiana’s first whack at the piñata went like this:

Louisiana’s attorneys [declared] that there are 2,000 family planning providers ready to accommodate new patients [if the state defunds Planned Parenthood]. A federal judge, reviewing the list in an early September court hearing, found hundreds of entries for specialists such as ophthalmologists; nursing homes caregivers; dentists; ear, nose, and throat doctors; and even cosmetic surgeons.

“It strikes me as extremely odd that you have a dermatologist, an audiologist, a dentist who are billing for family planning services,” said the judge, John deGravelles, who will determine in the next week whether it is legal for the state to end Planned Parenthood’s Medicaid contracts. “But that is what you’re representing to the court? You’re telling me that they can provide family planning and related services?”

This week, Louisiana withdrew that line of argument and prepared a new one:

State officials say they will shortly refile to defund Planned Parenthood “for cause”—the “cause” being that the organization reached a $4.3-million settlement in Texas in 2013 over a billing dispute, which Louisiana claims makes it unsuitable to treat women in Baton Rouge and New Orleans.

In 2014, Planned Parenthood of the Gulf Coast performed 2,100 well-woman exams, 1,200 pap smears, and 11,000 STI tests, and it administered long-lasting contraceptives 4,100 times, to 5,200 patients. The Centers for Disease Control rank Louisiana first in the country in gonorrhea infections, second in Chlamydia infections, and third in HIV and syphilis infections. The RealClearPolitics polling average ranks Jindal second in losing the GOP nomination for president.