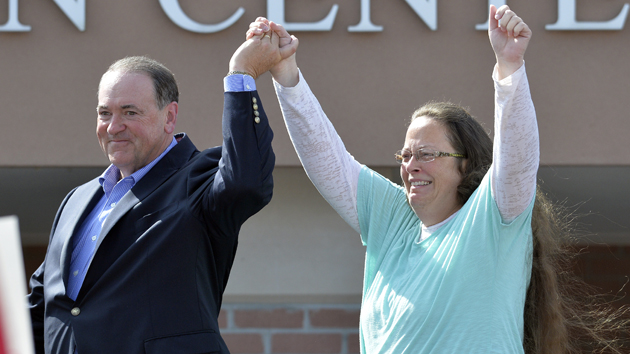 Mike Huckabee raises Kim Davis's arm in triumph before a jubilant crowd in Kentucky upon her release on Tuesday.Timothy D. Easley/AP

Yesterday, Kim Davis—the now-infamous Rowan County clerk who was held in contempt for refusing to issue marriage licenses to same-sex couples in Kentucky—was released from a five-night stint in jail. Escorted by Mike Huckabee, the GOP presidential hopeful who helped throw the rally for her release, an emotional Davis threw her arms in the air, closed her eyes, and basked in the sounds of “Eye of the Tiger,” Survivor’s 1982 hit about being awesome.

Unfortunately for Davis, the writers of that song don’t think Davis is so awesome—and they never agreed to let her or Huckabee broadcast their song at the rally. Survivor’s Jim Peterik tweeted his disapproval, saying Davis would be receiving a “cease and desist” letter from his publisher:

I have not authorized the use of Eye of the Tiger for use by Kim Davis and my publisher will issue a C&D. This does not reflect my views.

CNN reports that Peterik was shocked to hear that his song was played at the rally:

“I was gobsmacked,” he said. “We were not asked about this at all. The first time we saw it was on national TV.” Peterik’s co-writer, Frankie Sullivan, was also upset about the use of “Eye of the Tiger” and posted a message on Facebook to vent. “I would not grant her the rights to use Charmin!” he wrote.

This reaction is not completely uncommon when it comes to musicians and political events. When Donald Trump played Neil Young’s “Rockin’ in the Free World” at an event at Trump Tower in June to announce his candidacy, Young’s longtime manager Elliot Roberts told Mother Jones that the use of the song was unauthorized. “Mr. Young is a longtime supporter of Bernie Sanders,” he said.