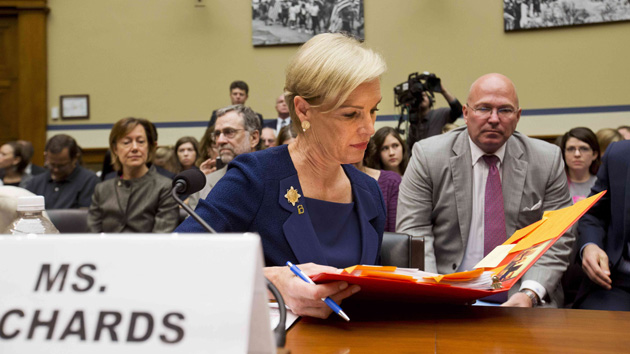 Planned Parenthood president Cecile Richards appeared today before the House Oversight and Government Reform Committee, in the most recent congressional hearing examining the use of taxpayer funds by the Planned Parenthood Federation of America. This was Richards’ first appearance before Congress. She had not been invited to participate in either of the two hearings conducted by the House Judiciary Committee earlier in the month, in the wake of the heavily edited and controversial videos released by anti-abortion activist David Daleiden.

Planned Parenthood receives approximately $450 million annually in federal funds, nearly all of which are reimbursements for women’s health services from programs administered by the Department of Health and Human Services. According to Planned Parenthood, last year 41 percent ($528.4 million) of its revenue came from government health services grants and reimbursements.

“The question before us is: Does this organization—does Planned Parenthood—really need a federal subsidy?” said House Oversight chairman Jason Chaffetz (R-Utah). “Every time we spend a federal dollar, what we’re doing is pulling money out of somebody’s pocket and we’re giving it to somebody else. What I don’t like, what I don’t want to tolerate, what I don’t want to become numb to is wasting those taxpayer dollars.”

Here are some of the recurring themes from the hearing that attempted to answer his question.

1. Her salary is too high: Chaffetz spent much of his allotted time interrogating Richards about her $590,000 annual salary, which he characterized as “exorbitant.” She corrected him, saying her annual salary is actually $520,000. (Female nonprofit CEOs still make markedly less than male CEOs. In 2013, for example, Laurance Hoagland Jr., chief investment officer of the William and Flora Hewlett Foundation, made $2.5 million, and John Seffrin, CEO of the American Cancer Society, made $2.1 million.) Rep. Carolyn Maloney (D-N.Y.) responded angrily to this inquisition. “The entire time I’ve been in Congress, I’ve never seen a witness beaten up and questioned about their salary,” she said. “Ms. Richards heads a distinguished organization providing health care services to millions of Americans. I find it totally inappropriate and discriminatory.”

2. Her apology was self-incriminating: Several times, Richards was subjected to loud, often aggressive mansplaining about when it is and is not appropriate to issue an apology. Members were referring to a video that PPFA released days after the first sting video in which Richards said, “Our top priority is the compassionate care that we provide. In the [sting] video, one of our staff members speaks in a way that does not reflect that compassion. This is unacceptable, and I personally apologize for the staff member’s tone and statements.” Rep. Jim Jordan (R-Ohio) repeatedly asked Richards to justify this. “Why did you apologize?” he asked over and over again. “You can’t have it both ways. If nothing was done wrong, why did you apologize? You don’t apologize if she didn’t say anything that was wrong.”

3. Planned Parenthood doesn’t provide mammograms: Republican critics of PPFA were also upset that Planned Parenthood clinics don’t provide mammogram services, despite the fact that radiology centers usually offer them because Medicaid reimbursements can’t come close to covering their operational costs. This point seemed to be lost on committee members who considered the lack of mammography as evidence that Planned Parenthood did not really provide women’s health services. Richards explained that when she goes to see her general practitioner and she gets a breast exam, she is referred to a radiologist to get a mammogram. Centers that depend on Medicaid reimbursement are often unable to pay for the equipment and radiologists’ salaries. New 3-D mammography technology is even more expensive. Rep. Marsha Blackburn (R-Tenn.) saw this as evidence that Planned Parenthood fell short in providing acceptable women’s health services: “Do you acknowledge that community health centers offer a broader range of services, including mammograms?” To this, Richards replied, “I’m not an expert on what all community health centers provide.”

4. Taxpayer dollars are paying for abortions: The repeated expressions of outrage by Republicans over “taxpayer dollars” being used for abortion services was, according to committee member Rep. Brenda Lawrence (D-Mich.), “exhausting.”

“I know my colleagues are more intelligent than this,” Lawrence said. “This is not a lump sum we give Planned Parenthood. It is a reimbursement.”

Under federal law, no taxpayer dollars are allocated to abortion services. PPFA has submitted its tax filings and reimbursement records, and so far there has been no evidence that it violated this law. That did not stop Rep. Cynthia Lummis (R-Wyo.) from expressing concern that “taxpayer dollars are being used to free up services that you provide that are aberrant services in the view of many taxpayers.”

5) Planned Parenthood provides too many abortions: Rep. Mark Meadows (R-N.C.) does not understand how the 327,000 abortions Planned Parenthood performed in 2014 amount to only 3 percent of Planned Parenthood’s services. Meadows claimed it was more like 12 percent. But as Richards explained, some patients visit more than once, and for multiple services, bringing the percentage down substantially.

And as my colleague Kevin Drum reported, Chaffetz used a chart from anti-abortion group Americans United for Life that incorrectly claimed that Planned Parenthood’s breast examinations have trended radically downward in recent years, while abortion services have substantially risen. In fact, cancer screenings have declined because, as Richards said, “some of the services, like pap smears, dropped in frequency because of changing medical standards about who should be screened and how often.” Abortion rates for Planned Parenthood have only increased about 2 percent per year since 2006.

6) Planned Parenthood is in cahoots with President Barack Obama: Toward the end of the nearly six-hour hearing, Jordan asked Richards about the internal workings of her staff. “Since the videos, has anyone from HHS, CMS contacted you?” Richards replied that because she has a big staff, she can’t answer that with 100 percent confidence. “Has the Attorney General of the United States Loretta Lynch contacted Planned Parenthood?” Jordan persisted. “Has anyone from the Justice Department contacted Planned Parenthood since the videos surfaced? There are potentially four federal crimes committed here, and all I’m asking is, has the Justice Department contacted you?” Richards repeated that she could not answer his questions with any certainty.

Investigations are also ongoing in the House Energy and Commerce Committee and in the House Judiciary Committee. So far, no wrongdoing has been found. Six state investigations that were triggered by the videos have also been closed after finding no evidence that Planned Parenthood violated law.

A subpoena has been issued to anti-abortion activist Daleiden for his investigative materials, and according to Chaffetz, they have been received but not yet opened or examined.