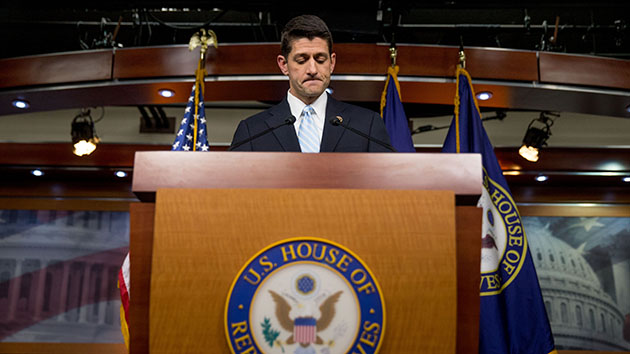 House Republicans are currently grappling with a fundamental philosophical question: What happens when an ungovernable group must elect a new leader?

A month after Speaker John Boehner announced his plan to resign, the Republican majority in the House has been unable to find a replacement for him. Boehner’s deputy, Majority Leader Kevin McCarthy (R-Calif.), was the favorite to succeed Boehner, but he was forced to step aside amid opposition from the caucus’ most conservative members. McCarthy’s exit left the party in chaos and led to calls for Paul Ryan to become the next speaker. On Tuesday, the Wisconsin Republican told his caucus he would consider taking the job, signaling that an end to the party’s leadership crisis might finally be near. Ryan, the chairman of the Ways and Means Committee and Mitt Romney’s running mate in 2012, has credibility in both moderate and conservative circles.

But there’s a catch. Ryan will take the job only if every caucus in his party—including the right-wing 40-member Freedom Caucus that helped force Boehner out of office—unites behind him. In short, the Republican Party has to promise to be governable. And the hardliners have to promise to stop being such hardliners. It’s a tall order—and Ryan wants an answer by Friday.

To many insiders of the conservative movement, it’s hard to imagine why Ryan would want the speakership. “Paul Ryan has never wanted this job,” says Norm Ornstein, a political scientist at the conservative American Enterprise Institute. Ornstein thinks Ryan eventually wants to be his party’s presidential nominee, but “getting there is going to be much easier if you’re the chairman of the Ways and Means Committee than if you’re in the leadership.”

The most compelling reason for him to take the job is what might happen if he doesn’t. The longer the search for a new leader continues, the more Republicans will be perceived as a party in disarray, with that perception spilling off Capitol Hill and onto the presidential campaign trail. “They continue to demonstrate that they simply can’t govern, and that becomes a problem for presidential candidates, even for the Senate, if you go into a continued, basically, civil war,” says Ornstein. As Ryan himself put it Tuesday, “I came to the conclusion that this is a very dire moment, not just for Congress, not just for the Republican Party, but for our country.”

The question is whether the hardliners in the Republican Party will conclude that Ryan is the most conservative speaker they can realistically elect, and whether they will foresee the damage to the party if they draw out the process of replacing Boehner. Logic might dictate that they will—but logic has never induced the Freedom Caucus to compromise before. “It doesn’t fit history or their logic,” says Ornstein.

Ryan faces several major obstacles to the speakership. First, the far right doesn’t trust him. To Democrats, he’s the uber-conservative whose budget proposals would dismantle Medicare. But the most conservative Republicans are skeptical of Ryan’s resume, which includes a vote for the Wall Street bailout, support for immigration reform, and his recent backing of the Trade Promotion Authority sought by President Barack Obama. In 2013, Ryan cut a budget deal with Sen. Patty Murray (D-Wash.), demonstrating his ability to unite his caucus around a pragmatic solution. Whereas about two-thirds of the GOP caucus had voted against recent budget measures—including one to end the government shutdown that October and one to avoid the “fiscal cliff” in January—only 62 Republicans voted against Ryan’s budget compromise, even though it didn’t touch entitlements or cut spending as much as the tea party hoped it would. But 62 votes is still a large number—enough to derail any legislation that doesn’t get support from Democrats and enough to make the speaker job a perpetually unpleasant one.

Second, Ryan is demanding that the Freedom Caucus give up its power to depose the speaker at any time through what is called a motion to vacate the chair—an arcane procedure that the Freedom Caucus used in order to exact demands from Boehner and ultimately hasten his departure. Under the current rules, any member can introduce this motion, and the House can remove the speaker with a majority vote. The Freedom Caucus already seems skeptical about giving in to this demand. “I thought if it was good enough for Thomas Jefferson, it was probably good enough for the U.S. House today,” Freedom Caucus member Tim Huelskamp (R-Kan.) told Roll Call on Tuesday. Since the Freedom Caucus and its allies have been pushing to increase their power on Capitol Hill, it’s a stretch to ask them to relinquish one of their biggest bargaining chips.

Third, the hardliners have never chosen to compromise on a good deal instead of pushing for a perfect one. Erick Erickson, the editor of the conservative blog RedState, inverted an old aphorism a year ago and urged Republicans, “Don’t make the good the enemy of the perfect.” Even though Ryan is very conservative and his speakership could save the Republican Party from an embarrassing internecine battle over the coming weeks, the Freedom Caucus and its allies have seen little reason to compromise. On NBC’s Meet the Press recently, Rep. Dave Brat (R-Va.), the Freedom Caucus member who beat House Majority Leader Eric Cantor in a primary last year, denied that the leadership fight would hurt his party. Washington Post columnist Eugene Robinson asked Brat, “You have to win the White House. Are you not, with the Freedom Caucus, essentially making it less likely that there will be a Republican president elected next year? And then less likely that you’ll be able to set the national agenda?” Brat responded, “No, absolutely not.”

Finally, there is pressure from conservative groups and right-wing media figures to oppose Ryan. If the Freedom Caucus supports him, its members will buck some of their strongest allies outside Congress and potentially endanger their own jobs next November.

The Tea Party Patriots group is already agitating against Ryan and has dubbed him a “RyNO,” a spin on the term RINO (Republican in Name Only) often applied by conservative critics.

.@PRyan is a #RyNO and will not stand for conservative principles if elected Speaker pic.twitter.com/tAZVEcs3ea

Even Sen. Ted Cruz (R-Texas), a presidential candidate who has tried to stay out of the fray, refused to say whether Ryan is a true conservative on Meet the Press last Sunday.

Other conservative players are still trying to survey the political landscape after Ryan’s announcement Tuesday night. A spokesman for the conservative group FreedomWorks told Mother Jones, “We’re consulting with our allies on Hill, such as the House Freedom Caucus and other conservative members.” On Wednesday afternoon, the group released a statement saying, “The House Freedom Caucus wants a Speaker who will force the president to the negotiating table,” and adding, “We look forward to hearing what Ryan has to say about these concerns in the coming days.”

Tom Davis, a former moderate Republican congressman from Virginia, says the influence of talk radio and other right-wing media forces makes it difficult for these hardliners from very conservative congressional districts to justify any compromise to their constituents. “You’ve got social media, the media defining what’s what here,” says Davis. “And that makes it hard for these guys to basically get their message out in terms of compromising [and] voting for somebody.”

This story has been updated to include FreedomWorks’ Wednesday statement.