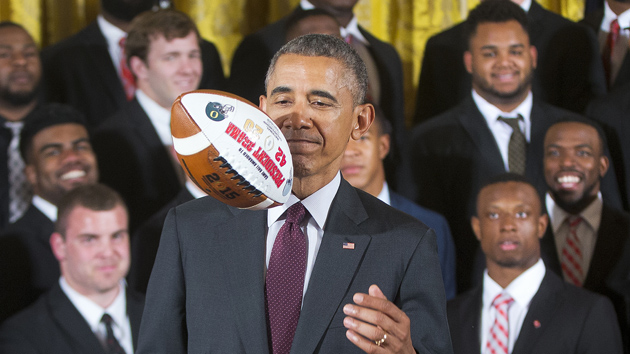 On October 27, 2012, the Ohio State football team stepped onto the field against Penn State with an added weight on its shoulders: a presidential election.

Two years earlier, a study published in the Proceedings of the National Academy of Sciences had uncovered an uncanny link between the fates of college football teams and incumbents running for Senate, governor, and president: In every election year between 1964 and 2008, the incumbent received a significant boost in counties where the hometown team had won two weekends before Election Day—about 1.6 percentage points on average, or half the effect of a major television ad campaign.

In crucial Franklin County, Ohio, home to the Columbus metro area and OSU’s enthusiastic fan base, the boost could be more than 3 percent. So what happened? The home team Buckeyes won, 35-23—and 10 days later, Barack Obama took 60 percent of the county’s vote, a key victory in a state he won by just 2 points that year.

But research published Monday in the same journal now casts doubt on football’s role in elections. Revisiting the 2010 study with a set of additional tests, researchers at the University of Chicago found a series of seemingly incompatible results: In counties where interest in college football was low, for example, the outcome of a game appeared to cause a larger shift in the polls, while extra experiments using results from the NFL showed no effect on the performance of incumbents. The authors argue their results point to a false positive in the original paper—likely a case of statistical “bad luck” or “chance,” says coauthor Anthony Fowler—and may give us reason to have a bit more faith in our fickle electorate.

Neil Malhotra, a professor of political economy at Stanford who coauthored the original study, says his team stands by its original conclusions, citing differences in the Chicago team’s methodology and expressing dismay that certain aspects of their study were not reexamined—including tests that showed an even greater boon to incumbents following surprise wins (determined by comparing betting odds to actual results). He also points to other research documenting football’s surprising social impact, including a 2009 study from the National Bureau of Economic Research that found an 8 percent increase in police reports of domestic violence in places where the home team faced an upset loss.

The new study rekindles a debate on the relationship between voter behavior and ostensibly irrelevant but emotionally charged events. Fowler explains that he focused on this five-year-old football study because it had broad implications for the competency of the electorate and was backed by compelling evidence. Unlike other studies on emotions and voting, such as a much-maligned inquiry that attempted to sync voting habits with women’s menstrual cycles, Malhotra’s research evaded a simple narrative that could either explain the relationship or declare it spurious.

“We should not go around arguing voters are irrational and incompetent.”

Still, the new findings don’t mean that we aren’t swayed by subconscious influences at the polls, Fowler says—particularly when it comes to the local elections and referendums that will take place around the country next week. It’s widely acknowledged, for example, that politicians running for municipal office should fight for prime ballot positioning—the closer to the top, the better. Other research has shown that voters who vote in schools are more likely to support bonds for education, while those who punch their ballots in churches may be less likely to support liberal referendums on social issues. In each case, researchers controlled for demographic considerations, isolating the impact of environment on voting preferences (called “contextual priming”).

But those results are most telling in low-stakes races where voters are often less informed and more likely to make a decision on the fly. That may provide an opening for additional research, says Malhotra, who acknowledges the relationship between the gridiron and the voting booth may depend in part on the information voters have as they head to the polls.

Fowler remains skeptical, pointing to the still scant nature of evidence on federal and gubernatorial races, in which voters are given months, if not years, to weigh a flood of information about candidates. “I don’t think there’s a single compelling study that shows emotions or mood affects elections,” he says. “We should not go around arguing voters are irrational and incompetent.”