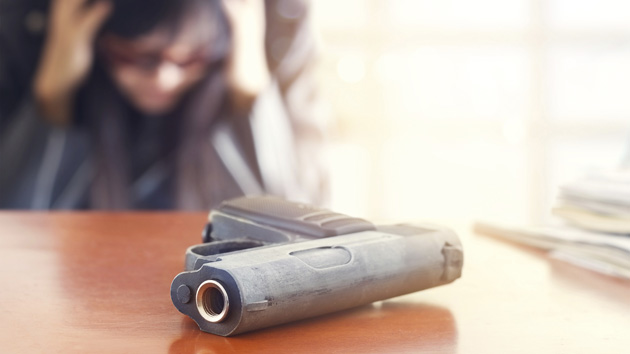 After each highly publicized mass shooting, there’s a political debate about how to make them stop, with researchers and politicians alike firing up about assault-rifle bans, background checks, and other possible solutions.

But Brad Bushman, a psychology and communications professor at Ohio State University, takes a broader view. Bushman researches the psychological mechanisms behind gun violence: Does having a weapon around make us more aggressive? How about watching video games? How do we respond biologically to seeing a gun? In a recent episode of the Inquiring Minds podcast, host Indre Viskontas spoke to Bushman about what he and others in the field have found.

Over the years, Bushman explains, dozens of studies have confirmed what researchers dub the “weapons effect”: People act more aggressively in the presence of a weapon, especially when something angers them. One study by researchers at Harvard found that drivers with guns in the car were more likely to engage in road rage, closely tailing other drivers and making obscene gestures—even when researchers controlled for things like gender, age, urbanization, and more.

Similar studies in labs have found that the presence of a gun causes participants enraged by another person to choose to make that person physically uncomfortable for longer periods of time, from delivering more electric shocks to forcing them to hear louder noises or keep their arms plunged in ice water for longer. In a review of 50 such studies, including more than 5,000 participants, Bushman found not only that the weight of the evidence support the weapons effect, but that the effect was also seen, though not to the same degree, with those who hadn’t been angered.

People act more aggressively in the presence of a weapon, especially when something angers them.

Some studies hint at the biological mechanisms at play, finding, for example, that our brains recognize guns just as quickly as other threats that we’ve evolved to quickly spot, like snakes and spiders. (It’s worth noting that this effect isn’t unique to guns: Syringes have been found to have a similar effect.)

A 2006 study went a step further, connecting biological changes with aggression. Here’s how it went: Researchers took saliva samples of 30 male college students in order to test their levels of testosterone, a hormone typically associated with aggression. Then, the students were told to hang out in a room by themselves—inside of which was a TV, a couch, and either a pellet gun or a kids toy—and write down instructions on how either the gun or the toy worked.

After 15 minutes, the students gave another saliva sample, and then they were told to add some hot sauce to a cup of water that they were led to believe another participant would have to drink. The results: Those participants in the rooms with pellet guns had higher increases in testosterone, and the more the testosterone levels increased, the more hot sauce they added to the water.

Of course, these studies often run into the same problem: No matter how spicy the hot sauce or cold the ice water, forcing people to endure physical discomfort in a lab isn’t the same as shooting people. Bushman acknowledges this, explaining that researchers can’t, for example, expose participants to a gun and then send them out into the real world with a weapon to see what happens.

“It’s not possible to know whether playing a violent video game causes violent criminal behavior such as a school shooting.”

Still, he says, the overwhelming evidence that exposure to weapons causes physical aggression is worrisome, particularly when you consider that about a third of American homes have guns. “I think this has important implications,” says Bushman. “They should put those guns in opaque containers or lock them up, separate from the ammunition. Some people display the guns in glass cabinets; that’s a really bad idea because research shows just the mere presence of guns can increase aggression.”

If seeing guns makes people more aggressive, it follows that violent media would do the same. This has been a controversial question for years, in part because so many people play violent video games and aren’t violent. A number of studies in leading medical journals, from The Lancet to Pediatrics, have found a link between exposure to violent media and physical aggression, a lack of empathy, and asocial behavior. And several medical organizations—including the American Medical Association, the American Academy of Pediatrics, and the American Psychiatric Association—consider violent media exposure to be a risk factor for actual violence.

None of this, of course, proves causation—and Bushman admits, “It’s not possible to know whether playing a violent video game causes violent criminal behavior such as a school shooting.”

But when it comes to video games, having weapons in the house, and general exposure to guns, Bushman takes a cautious tone. He quoted Leonard Berkowitz, the psychologist who conducted the first study on the weapons effect, back in the 1960s: “The finger pulls the trigger, but the trigger may also be pulling the finger.”