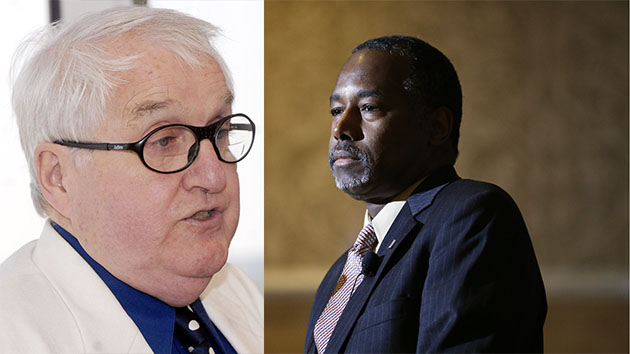 On Tuesday, the New York Times published a story that had the politerati abuzz. The headline was bold: “Ben Carson Is Struggling to Grasp Foreign Policy, Advisers Say.” The piece reported that the GOP presidential candidate’s “remarks on foreign policy have repeatedly raised questions about his grasp of the subject,” and it noted that “two of his top advisers said in interviews that he had struggled to master the intricacies of the Middle East and national security and that intense tutoring was having little effect.” Duane Clarridge, a top adviser to Carson on terrorism and national security, told the Times, “Nobody has been able to sit down with him and have him get one iota of intelligent information about the Middle East.” Ouch.

The Carson campaign immediately blamed the messengers. Carson’s spokesman called the article “an affront to good journalistic practices” and claimed that the Times had taken “advantage of an elderly gentleman.” Clarridge—known to his pals as Dewey—is 82 years old. But the damage was done. Clarridge’s observations reinforced the impression that Carson, a retired neurosurgeon, is in over his head when it comes to national security issues.

A particularly intriguing aspect of this dustup was that Carson had turned to Clarridge for foreign policy advice. Often portrayed as a veteran spymaster in the media, Clarridge has indeed had a long career in intelligence, but it has been a checkered one.

Clarridge first achieved public notoriety during the Iran-contra affair—the doozy of a scandal in which President Ronald Reagan secretly sold arms to the terrorist-supporting regime of Iran in order to free American hostages and in which his national security crew used these ill-gotten proceeds to secretly finance the CIA-backed contras who were trying to overthrow the socialist government of Nicaragua. Clarridge, then a top CIA official, played a role in both sides of the conspiracy. He helped White House aide Oliver North use a CIA front company to ship US-made HAWK missiles to Iran. According to the independent counsel who investigated the scandal, he also sought funding from the apartheid regime of South Africa for the contras, after Congress had cut off assistance for the contras. Clarridge retired from the CIA in 1987 after being formally reprimanded for his involvement in the Iran weapons deal.

But there was worse blowback to come. In 1991, independent counsel Lawrence Walsh charged Clarridge for lying to congressional investigators and a presidential commission about his role in the trading-arms-for-hostages skullduggery. Essentially, after news of the clandestine deal with Tehran broke, Walsh alleged, Clarridge had repeatedly lied to investigators, claiming that he had not known that the shipments he had helped North arrange contained weapons. Clarridge had stuck to the cover story that these shipments involved oil drilling equipment. Walsh asserted, “There was strong evidence that Clarridge’s testimony was false.”

Walsh also pointed out that Clarridge had falsely testified when he had told government investigators that he had not known about Reagan administration efforts (arguably illegal) to seek secret financial aid from other countries for the contras and and that he himself had not sought such funds for the contras. Walsh maintained that CIA cables proved that Clarridge had misled investigators about this. Yet Walsh did not bring perjury charges against Clarridge for these allegedly false statements, noting the reasons for sidelining this portion of the case were classified.

Clarridge did end up skating on the charges related to the Iran weapons scheme. His trial was scheduled to start on March 15, 1993. Yet on Christmas Eve in 1992, President George H.W. Bush, who was in the last weeks of his presidency, pardoned six Iran-contra defendants, including Clarridge. The trial was canceled.

Clarridge was linked to other notorious CIA scandals of that era. In 1984, the Associated Press revealed that the CIA had produced a how-to guide for the contras on waging psychological operations in a guerilla war. The document advised the contras on how to kidnap, blackmail, and assassinate. News of its existence sparked a public furor. “To the extent (unclear) to which the manual’s advice was applied,” a Washington Post editorial noted, “people have died and a whole style of terror and counter-civilian violence and deception has been condoned.”

Three years later—as the Iran-contra scandal was making headlines—a congressman who had served on the intelligence committee said that Clarridge, who had been chief of the CIA’s covert Latin America division and an ardent supporter of the contras, had been one of two senior CIA officials who had authorized the assassination manual, which had suggested that the contras kill Nicaraguan community leaders. And, this congressman noted, then-CIA director William Casey, though he had disciplined five midlevel CIA officers involved with the assassination manual, had taken no action against Clarridge; Casey had even made sure that Clarridge’s name would not appear in an inspector general’s classified report on the episode.

Clarridge also oversaw another controversial CIA operation: the secret mining of Nicaraguan harbors in the early 1980s. Years later, the International Court of Justice at the Hague ruled this a violation of international law.

More recently, Clarridge landed in controversy when the New York Times revealed in 2010 that a Pentagon official had created a network of private contractors in Pakistan and Afghanistan to help locate and kill suspected militants. One of the security firms involved in this effort said it had retained Clarridge for this project, but Clarridge denied participating in the operation. (The Times noted that it had hired Clarridge to assist in the case of David Rohde, a Times reporter who had been kidnapped by militants in Afghanistan.) A year later, the Times reported that Clarridge had developed his own private network of spies and operatives in Pakistan and Afghanistan that had until recently been funded by the US military and that at this point was being financed by private sources. The article made Clarridge seem like a bit of a rogue operator:

Hatching schemes that are something of a cross between a Graham Greene novel and Mad Magazine’s “Spy vs. Spy,” Mr. Clarridge has sought to discredit Ahmed Wali Karzai, the Kandahar power broker who has long been on the CIA payroll, and planned to set spies on his half brother, the Afghan president, Hamid Karzai, in hopes of collecting beard trimmings or other DNA samples that might prove Mr. Clarridge’s suspicions that the Afghan leader was a heroin addict, associates say….

[Clarridge’s] dispatches—an amalgam of fact, rumor, analysis and uncorroborated reports—have been sent to military officials who, until last spring at least, found some credible enough to be used in planning strikes against militants in Afghanistan. They are also fed to conservative commentators, including Oliver L. North, a compatriot from the Iran-contra days and now a Fox News analyst, and Brad Thor, an author of military thrillers and a frequent guest of Glenn Beck.

The Times article added, “From his days running secret wars for the CIA in Central America to his consulting work in the 1990s on a plan to insert Special Operations troops in Iraq to oust Saddam Hussein, Mr. Clarridge has been an unflinching cheerleader for American intervention overseas.”

For decades, Clarridge has been a shoot-from-the-hip operator who has thrived in the gray areas, when he’s not altogether flouting rules. For a foreign policy neophyte—as Carson is—Clarridge certainly is an unconventional adviser, and perhaps a dangerous one.