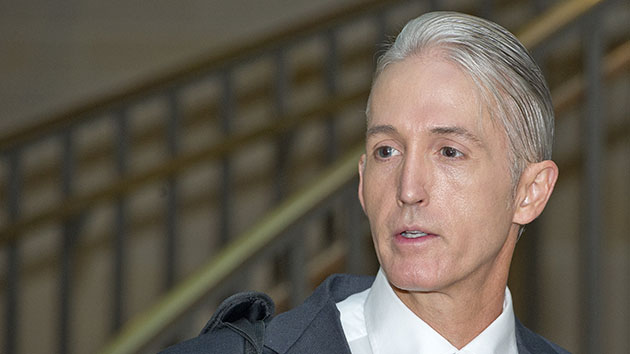 Weeks after chairing the Benghazi hearing with former Secretary of State Hillary Clinton, Rep. Trey Gowdy (R-S.C.) held another politically charged hearing Thursday, this time focused on the refugee crisis in Syria and the efforts of US governors and other politicians to block Syrian refugees from entering their states.

Gowdy, chair of the House Judiciary Subcommittee on Immigration and Border Security, convened Thursday’s hearing to discuss the process of vetting refugees who are attempting to enter the United States. During his opening statement, Gowdy attacked President Barack Obama, whose comments, Gowdy said, are designed to “cut off debate rather than discuss foreign policy.” Obama has insisted that refugees are put through a rigorous screening process, but Gowdy said there are few reliable sources of information in chaotic regions such as Syria to verify information presented by refugee applicants.

“It’s not that we don’t have a process—we don’t have any information,” he said. “You’re talking about a country that’s a failed state, that doesn’t have any infrastructure, all the data sets—the police, the intel services—you normally would go to to seek that information, don’t exist. That is not a Republican presidential hopeful. That is the head of the FBI.”

Gowdy was especially outraged at Obama for having mocked Republican presidential candidates Wednesday during a speech in the Philippines.

“The president says we’re scared of widows and orphans. With all due respect to him, what I’m really afraid of is a foreign policy that creates more widows and orphans,” Gowdy said, suggesting that the president begin “a foreign policy in the Middle East, including Syria, where people can go back to their homelands. Which is their preference. Maybe he ought to defeat that JV team that you thought you had contained.”

“I know the murderous attacks in Paris last Friday evening have raised many questions about the spillover of not just migrants to Europe, but also the spread of violence from war zones in the Middle East to the streets of a major European capital,” Richard said. Refugees admitted to the United States “are subject to the highest level of security checks of any category of traveler to the United States,” she said, including fingerprint and background checks and lengthy in-person interviews by specially trained Department of Homeland Security officers. The screening involves several national law enforcement and intelligence agencies, including the National Counterterrorism Center and the FBI’s Terrorist Screening Center, as well as the departments of state, homeland security, and defense.

“The vast majority of the 3 million refugees who have been admitted to the United States, including from some of the most troubled regions in the world, have proven to be hardworking and productive residents,” Richard said. “They pay taxes, send their children to school, and after five years, many take the test to become citizens.”

Mark Hetfield, president and CEO of HIAS, a refugee resettlement agency, told the committee that he was “disheartened” by the response of those who would block Syrian refugees outright.

“I mistakenly thought that signs and attitudes like ‘Irish need not apply,’ ‘no coloreds,’ ‘no beer sold to Indians,’ and ‘No Jews or dogs allowed’ were ugly relics buried in our past,” he said. “Apparently not. A number of governors have unearthed these skeletons of xenophobia, racism, and Islamophobia for political gain.”

Mark Krikorian, executive director of the Center for Immigration Studies, advocated the halting of refugee resettlement in the United States, and said that while he supports US resources going to humanitarian and refugee protection, he doesn’t think the vetting process is safe. More refugees could be helped by encouraging them to stay in the Middle East, he said.

The hearing came just a few hours before the House voted overwhelmingly to approve a measure that would require the director of the FBI, the secretary of homeland security, and the director of national intelligence to confirm that each refugee applicant from Syria and Iraq poses no threat. (See Mother Jones‘ report on that bill here.) The Senate may not take up the bill until after Thanksgiving, and White House officials have said the president will veto the bill if it reaches his desk.

“You can’t say there’s no risk, and I appreciate that nobody’s tried to say that,” Gowdy said at the conclusion of the hearing. “We all agree that we are dealing with an enemy that affirmatively wants to do whatever bad thing they can do to us. And I just think it’s put the American people in a really, really tough position.”