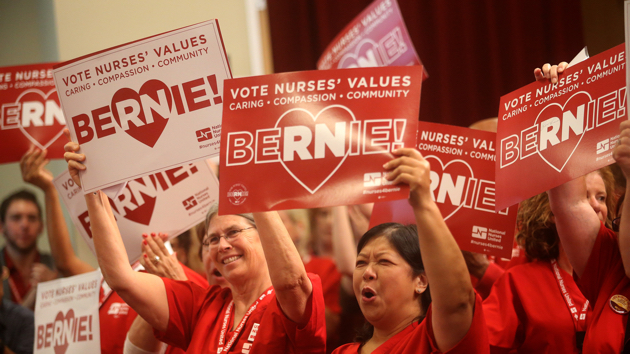 When Bill Clinton swings by the Machinists Union hall in Cedar Rapids, Iowa, on Sunday night, he’ll be flanked by a bevy of national labor leaders. It will be a fitting scene for the final night before the first votes of the Democratic presidential nomination contest, a campaign in which Hillary Clinton has wrapped up the vast majority of national union endorsements. She’s received the support of 24 unions, she bragged at an event last week, representing more than 10 million of the 14.6 million unionized workers in the country.

Organized labor has been a major push for her campaign as she closes out Iowa. Last week, Hillary Clinton hosted a “Hard Hats for Hillary” event that included the presidents of the Carpenters, Ironworkers, and Federation of Government Employees, among others. She released a gauzy video on her support for unions, in which she tells their members, “A lot of the work you do may not be as well understood and appreciated as it should be.”

On the ground here in Iowa, however, Clinton’s labor advantage isn’t quite so clear-cut. There aren’t polls measuring statewide union support for the two candidates, and it’s notoriously difficult to forecast caucus results anyway, given how much they come down to turnout and organization. But mounting anecdotal evidence from Iowa suggests that notwithstanding the endorsements of the people atop the unions, Clinton might not be able to count on the same level of support from actual union members in Monday’s caucuses.

“I know there’s a lot of rank-and-file people that like Bernie Sanders,” says Ken Sager, president of the Iowa AFL-CIO. Sager, a member of the International Brotherhood of Electrical Workers, which has yet to endorse, says he’s been getting about equal volumes of pro-Sanders and pro-Clinton mail—about seven pieces of mail per day from the campaigns and various unions in the final days of the race—despite the fact that his wife is a member of the pro-Clinton AFSCME.

“The people that I have talked to think that he is very genuine in terms of supporting the issues that are important to workers and their families,” Sager says, noting that other local chapters of the electrical union in other parts of the country have endorsed Sanders. “He talks about the things that will work in making a difference. Getting everybody to be involved.”

Lance Coles, the communications director for the state’s AFL-CIO, predicts that ample union support could propel Sanders to a statewide victory on Monday. “I’ve said that for a long time,” he says. “I think Bernie’s going to squeak it out here, I think he’s going to pull it.”

Coles’ union, the American Postal Workers Union, has endorsed Sanders, and he’s been active in boosting Sanders’ efforts. “Come Monday night, there’s going to be a lot of Bernie support,” he says. “Probably a lot more than what people think.”

“The Bernie [events] are like pep rallies,” he adds. “They’re much more, I don’t want to say agitated, but excited, there’s a lot more energy in their events. Most of the stuff I see for Hillary is: one, she’s always late, which pisses a lot of people off. And I understand that with Secret Service, I get it, I understand that. But a lot of people are really frustrated with that.”

Last fall, when Clinton skipped the state’s AFL-CIO convention while Sanders and other candidates attended, local labor leaders groused to Bloomberg Businessweek‘s Josh Eidelson that they were wary of Clinton, primarily over her shifting positions on free trade. “I would love to have her be the first female president,” Stacey Andersen, a representative of the Glass, Molders, Pottery, Plastics & Allied Workers International Union, told Eidelson, “but she’s going to have to come out a little bit stronger than what I’ve been seeing when it comes to labor-friendly issues.” And as the Intercept recently noted, Clinton’s union endorsements have been the decisions of the group’s leadership, while the handful of unions backing Sanders have done so after directly polling their members.

On Monday afternoon, Sanders appeared at the local hall of the United Steelworkers in Des Moines (showing up on time) to assure the crowd—whose national union has yet to endorse—that he’s the better candidate for organized labor. Parked outside was a red campaign bus from the National Nurses United emblazoned with an endorsement for Sanders. “The most trusted profession trusts Bernie,” the side of the bus read. The Sanders staff distributed signs to the crowd reading, “Vote Labor Values, Labor for Bernie.”

“I like his views and his opinions,” Josh Fleenor, a 35-year-old tire builder in the local union, told me before the event. “Bring America back.”

Throughout his speech, Sanders touted his record of fighting for low-wage workers, defending efforts to block trade agreements—a veiled dig at Clinton—and to expand union membership through measures such as card check. “I don’t get any money, and I don’t want any money, from corporations,” he said. “Never got a nickel. Don’t want any money from the billionaire class. But I am very grateful for the support that I’ve received from the Steelworkers throughout my entire political career. Thank you guys very, very much.”

“Initially I didn’t think he could win,” said Jerry Addy, a retired operating engineer at the event. “Now I think he can win. I just think Bernie’s a better person, a better candidate. Bernie’s doing retail. Hillary’s doing wholesale.”