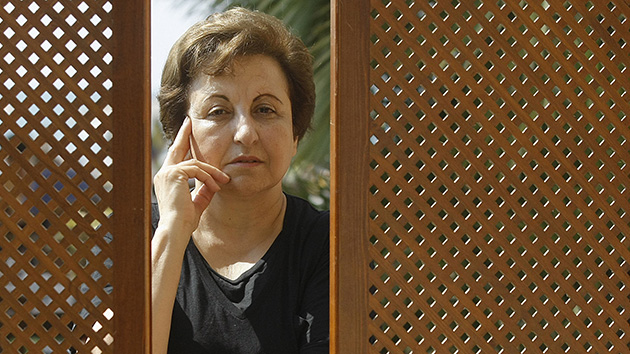 Speaking from London, where she lives in exile, Shirin Ebadi says she is hopeful about her country’s future. “Human rights activists do not have the right to lose hope,” the Iranian human rights lawyer says. “Just imagine if you’re in a boat and it breaks down in the middle of the sea. Is there any other way but to swim? If one becomes tired and discontinues swimming, that person will sink. We have to be hopeful.”

In 2003, Ebadi became the first Iranian and the first Muslim woman to win a Nobel Peace Prize. Despite her international profile, her work defending the rights of women, children, and political prisoners in the Islamic Republic of Iran earned her years of harassment and intimidation. Her phones were tapped, her colleagues were imprisoned, her home was attacked, and death threats were tacked to her front door. Though she felt compelled to flee Iran in 2009, she has not been silent. She has a written a new book, Until We Are Free: My Fight for Human Rights, which details her struggle for justice and continued love for a country that took everything from her.

I spoke on the phone with Ebadi before Iran’s parliamentary elections last Friday, which resulted in a sweeping victory for Iran’s reformists.

Mother Jones: What do Iranians want out of the upcoming elections?

Shirin Ebadi: The people are fed up with corruption and embezzlement. They object to censorship. The first thing that the people of Iran want is free elections. The government of Iran claims that every two years there are elections. But none of them are free. The competence of the people who have been nominated first has to be approved by the Guardian Council. It is a vetting process, and only then can Iranians elect these people. Yet the members of the Guardian Council are not elected by the people. They have been appointed by the leader [Ayatollah Ali Khamenei]. Any person who has the slightest criticism will not be approved. Over 40 percent of the people who have been nominated have not been approved.

MJ: How do you feel about the nuclear agreement and the recent easing of some sanctions reached between the United States and Iran?

“The government of Iran claims that every two years there are elections. But none of them are free.”

SE: I am glad that the deal went through. President Obama said numerous times that the alternative would be a war, and naturally I do not support a war. Of course, this agreement takes a long time to implement, and at any minute any violation can occur, and that concerns me. I’m worried that it may not go on as desired. Let’s not forget that the fundamentalists in both countries, Iran and the US, are not happy with this deal.

MJ: How are Iranians reacting to the deal?

SE: The people of Iran are happy about this deal, and the reason is a number of sanctions were removed and they feel like their life can become easier as a result of this deal.

MJ:  Does the fact that the nuclear deal was reached signal any kind of shift for Iran’s domestic or international policies?

SE: After the nuclear deal, the leader of Iran stated that neither the domestic nor the international policies of Iran will be changed as a result of this deal. Since the deal, the number of people who have been put in prison and the number of executions have increased. Iran has added to its forces in Syria and in Yemen. In government demonstrations we still see the motto “Death to the US.”

MJ: Recently the Iranian-American journalist Jason Rezaian was released from prison. But many other journalists, activists, and political dissidents remain incarcerated in Iran.

SE: The most important problem in Iran is that the courts have lost their independence, and they are under the influence of the Ministry of Intelligence and their people. This is why we still witness a number of journalists and human rights activists, my colleagues, and a number of feminists, in prison. People like Jason Rezaian, who were imprisoned and later released, were actually taken hostage by the government of Iran. 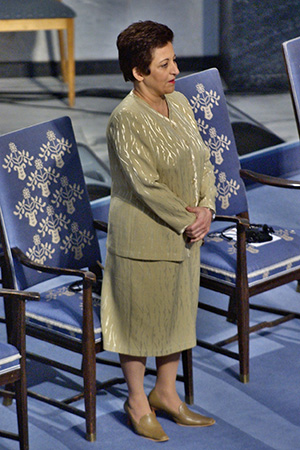 MJ: Tell me about your colleagues who have been imprisoned.

SE: For example, Abdul-Fatah Soltani, an attorney who is well known in Iran for his human rights activism, has received 11 years of imprisonment. Another is Mohammad Seifzadeh, who received six years of imprisonment. He is still doing his time. They are lawyers who worked with me at the Center for the Defense of Human Rights. We did the pro bono defense of political prisoners and prisoners of conscious who were put in prison in Iran.

I have to add that one of the very well known Iranian feminists, who was my vice president at the Center for the Defense of Human Rights, Miss Nargess Mohamedi, has received six years of imprisonment and is doing her time now. In addition to Nargess, there are 30 other feminists imprisoned in Tehran. This is not counting those who are imprisoned in different cities in Iran.

MJ: What are the charges against them?

SE: Usually the charge against the feminists, the journalists, and the attorneys who defend human rights is having taken measures against the national security. All of these people have received this charge because they have spoken of the violations of human rights on the part of the government. Either they have written articles, or given speeches, or they have brought up the issue in court while defending their clients.

MJ: Of your colleagues who have been released, what are their lives like now? Do they continue their work?

MJ: What can you say about the younger generation and the future of Iran? Any promising developments?

“The life of a woman is worth half of that of a man [in Iran]. If a terrorist attacks me and my brother on the street and we are both injured the same, the compensation he receives is twice as much as the compensation that I would receive.”

SE: I’m very optimistic about the future of Iran. We have a young population. They are very educated, and they are sensitive to social issues. I don’t think that they will remain silent. The feminist movement is very strong. The workers’ movement is very strong. But most importantly, these movements are in contact with each other; they have a relationship.

MJ: Can you tell me about the status of women in Iran?

SE: Over 60 percent of the university students in Iran are female. The women in Iran are better educated than men. Unfortunately, the percentage of unemployment among women is three times as much as men. After the revolution, many discriminatory laws were passed against women. The life of a woman is worth half of that of a man. If a terrorist attacks me and my brother on the street and we are both injured the same, the compensation he receives is twice as much as the compensation that I would receive. Testimony of two women in court equals the testimony of one man. A man can marry four wives, and divorce his wives as he pleases. However, it is very difficult for a woman to divorce her husband.

Women in Iran face these problems in ordinary life. When they are faced with these discriminatory laws they can understand and feel them. Naturally, in a society where women are better educated than men, women cannot put up with these laws. This is why the feminist movement has strengthened in Iran and has even influenced the women of many of the fundamentalists. Many of them are now feminists as well.

MJ: What are feminists doing to expand their movement?

SE: Social media and the internet play a big role, and there are home meetings where women meet in different people’s homes. They come out, and word of mouth spreads.

MJ: What is your take on Iran’s involvement in the wars in Syria and Yemen?

SE: The role of Iran has been very destructive. As an Iranian, I apologize to the civilian people of Syria who have been killed as a result of the useless intervention of Iran in Syria. It was with the aid of government Iran that the Houthis in Yemen were able to capture Sana’a. It is totally unacceptable for a government to interfere in the internal affairs of another government and send aid, money, and weapons, to the people who are against a certain regime in another country.

MJ: What is it like trying to influence the inner workings of your nation while living in exile?

SE: While living in exile I have become the loudspeaker for the people of Iran. I am the voice of the people in Iran whose voices are silent and whose demands cannot be heard by the rest of the world.

MJ: Do you believe in the idea that people are fundamentally good?

SE: Yes, people are fundamentally good. But conditions deteriorate them. For example, have you seen anyone stealing the oxygen in the air? When there is enough oxygen in the air for everyone, no one is going to take to violence in order to access it. But if there were not enough of it for everyone then people would result to violence in order to get it. Therefore we have to improve the conditions to have better human beings.

(On Thursday, March 10, Shirin Ebadi will be in the United States speaking at the Jewish Community Center of San Francisco.)