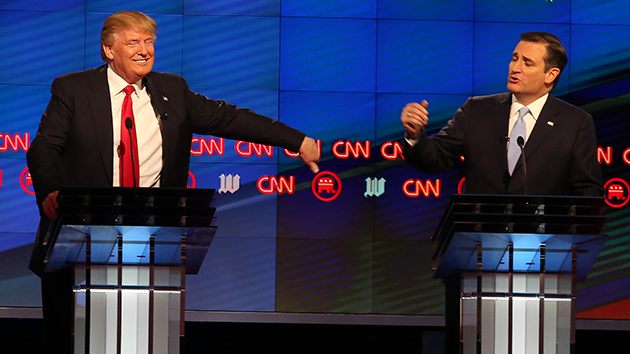 Donald Trump denied any involvement on Friday in a National Enquirer story alleging that Ted Cruz has had affairs with five different women, but he couldn’t help inserting himself into the melee. In a statement posted on Facebook, Trump said he hoped the allegations against “Lyin’ Ted Cruz” were not true, but hinted that they well might be.

I have no idea whether or not the cover story about Ted Cruz in this week’s issue of the National Enquirer is true or not, but I had absolutely nothing to do with it, did not know about it, and have not, as yet, read it.

Likewise, I have nothing to do with the National Enquirer and unlike Lyin’ Ted Cruz I do not surround myself with political hacks and henchman and then pretend total innocence. Ted Cruz’s problem with the National Enquirer is his and his alone, and while they were right about O.J. Simpson, John Edwards, and many others, I certainly hope they are not right about Lyin’ Ted Cruz.

I look forward to spending the week in Wisconsin, winning the Republican nomination and ultimately the Presidency in order to Make America Great Again.

On Friday afternoon, Cruz called the Enquirer‘s report “garbage” and accused “Donald Trump and his henchmen” of planting the story. Not to be outdone, Trump claimed in his response that it was Cruz who had surrounded himself with “political hacks and henchmen.”